Surge in big name activity for the ocean and tidal sector

The oceans cover more than 70% of Earth's surface.

Even though the sun affects all ocean activity, the gravitational pull of the moon primarily causes tides, while the wind forms ocean waves. 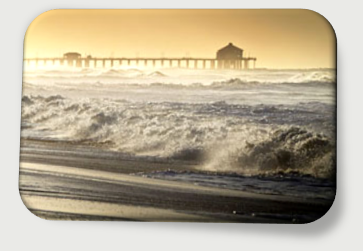 This works best when the temperature difference between the warm upper layer of the ocean  and the deep colder temperature of the ocean water is about 36 ° F (20 ° C). These conditions exist in tropical coastal areas, roughly between the Tropic of Capricorn and the Tropic of Cancer. To bring cold water to the surface, plants that run on ocean thermal energy conversion require expensive intake pipes with high-diameter, that are submerged a mile or more in the depths.

Some energy experts believe that if the conversion of thermal energy produced by the oceans could become cost-competitive with conventional technologies for producing energy, could be used to produce billions of watts of electricity.

The technology presented above is not new. In 1881 Jacques Arsened'Arsonval, a French physicist, proposed to capture the oceans thermal energy. Georges Claude was a student of d'Arsonval's and in 1930 built the first factory of ocean energy thermal conversion in Cuba. The system produced 22 kilowatts of electricity, with a low pressure turbine. In 1935, Claude built another plant on board of a 10,000-ton cargo ship, anchored off the coast of Brazil.

However, the weather and waves destroyed the plant before becoming a net energy generator. (Rated capacity is the amount of power generated after subtracting power needed to run the system).

In 1956, French scientists have developed a new 3-megawatt plant in Ivory Coast, West Africa. The plant was never completed because it was too expensive.

There are three types of systems: closed-circuit, open-circuit  and hybrid.

Closed circuit systems use fluid with a low boiling point, such as ammonia, to rotate a turbine to generate electricity. Hot water from the sea found on the surface, is pumped through a heat exchanger in which the liquid with low boiling point is vaporized. The extension of steam starts the turbo generator. Cold sea water is pumped through a second heat exchanger – condenses the vapor back into a liquid which is then recycled through the system.

In 1979, the Natural Energy Laboratory and several private sector partners have developed the mini experiment " Conversion of ocean's thermal energy" making the first successful production of net electricity by sea through closed cycle. The mini vessel was moored 2.4 km off the coast of Hawaii and produced enough net electricity to illuminate it (in rom “pentru iluminarea acesteia”) and power on board computers and TVs.

In 1999, the Natural Energy Laboratory tested a 250 kW closed circuit pilot, the plant being the largest ever put into operation.

Open circuit systems use tropical oceans hot water to produce electricity. When warm seawater is placed in a container of low pressure, it boils. The expanding steam turns a low pressure turbine attached to a generator.

The steam, after salt is left behind or in a low pressure container, is almost pure. (in rom scrii “…este aproape pur.”, fara “apa proaspata”) This is condensed (in rom scrii “condensat”) back into a liquid that is exposed to low temperature water in deep ocean.

Was achieved a power conversion efficiency up to 97%. In May 1993, a plant with open circuit at Keahole Point, Hawaii, produced 50,000 watts of electricity during a net power production experiment.

Hybrid systems combine features of closed and open circuit systems. In a hybrid system, warm seawater enters a vacuum chamber, where it is instantly evaporated into steam, similar to open-circuit evaporative process. The steam vaporizes a low-boiling liquid (in a closed-circuit loop) , resulting in the production of electricity by the turbine.

This technology has potential benefits beyond energy production. For example, cold seawater, used by a cooling installation of a power plant, can cool the fresh water in a heat exchanger or flows directly into a cooling system. Simple systems of this type are found in air conditioning units.

Temperature difference between the plant roots located in the cold ground and plant leaves that are in the warm air allows many plants that grow in temperate climates to be grown in the subtropics. Such examples are found in the Natural Energy Lab in the U.S., where there is a demonstration garden (in rom “unde se afla o gradina demonstrative”) near the plant that uses "Technologies to obtain energy from Oceans", which include more than 100 fruits and vegetables, many of which would’t survive under normal conditions, like Hawaii area.

Aquaculture is probably the best known byproduct. Cold water delicacies such as salmon and lobster, thrive in deep seawater which is nutrient rich from the processes of technology that obtains energy through ocean waters. Microalgae such as Spirulina, a healthy dietary supplement, can also be grown in the ocean at great depths.

Finally, an advantage of plants that work in open or hybrid circuit is to produce fresh water from sea water. Theoretically, a facility that generates 2 megawatts of net electricity could produce about 4300 cubic meters of desalinated water each day.

In general, carefully selected locations are essential for maintaining minimal effects in the aquatic environment. Experts believe that proper spacing of plants in tropical oceans can eliminate almost any potential negative effects on ocean temperatures and sea life.

Power plants that produce energy from ocean resources requires substantial capital investment in advance. Researchers believe that only private firms are likely to be willing to make huge initial investments required to build large systems, when the price of fossil fuels will increase dramatically and national governments will provide financial incentives.

Another factor hindering the commercialization of technology and this type of energy produced, is that there are only a few hundred locations on land in the tropics, in which the depth of seawater is quite close to shore, good to build a feasible plant.

One of the oldest  energy technologies obtained from the ocean is energy tide. All coastal areas have two flows and ebbs, reduced over a period of less than 24 hours.  With these differences, the tides can be harnessed into electricity, with the condition that the difference between high and low tide be at least 5 meters. However, there are only 40 places on Earth that shows the tidal situation of this magnitude.

Currently there are no plants using the tide, but conditions are good for producing energy from tides in Nnorthwest Pacific and North Atlantic regions.

Energy generation technologies through tidal include barrages or dams, special fences and turbines.

A dam or embank is typically used to convert tidal energy into electricity by passing water through turbine  that activates a generator. Gates and turbines installed along the dam.

When the tides produce an adequate difference in water level on opposite sides of the dam, gates are open. The water then flows through the turbine. (in rom lasa spatiu dupa punct) The turbines start a generator that produces electricity.

These types of fences look like giant turnstiles. They can be placed in channels between small islands or in straits, between a continent and an island. The turnstiles revolve through typical currents of coastal waters caused by tides.

Some of these currents runs up to 5-8 knots (5.6-9 miles per hour) and generates  an amount of energy as high as wind with much higher speeds. Since seawater has a density greater than air, ocean currents carry significantly more energy than air currents (wind).

The turbines used in tidal are similar to wind turbines. They are arranged in rows under water, as in some wind farms . Turbines function best when coastal currents run at speeds between 3.6 and 4.9 knots (4 and 5.5 mph). In the case of currents with such speed, a turbine with 15 meter diameter can generate as much energy as a large wind turbine that has a height of 60 meters. Ideal locations  for using tidal turbine farms are close to shore, in water, 20-30 meters deep.

Plants that run on tidal, mounted in dams, can impede the  migration of living creatures that live there, but the mud  gathered behind such systems can affect local ecosystems. The fences mounted in the tidal are can also affect aquatic creatures. Latest models of turbines that use the technology to obtain energy through tidal proved to be the least harmful to the marine environment, non-blocking the migration routes.

It does not cost much to operate these plants, but also their construction costs are high, so prolonging recovery investment. As a result, the cost of kilowatt-hour of energy from tides is not competitive with conventional energy obtained from processing fossil fuel.

Technologies of obtaining energy, which are based on waves, extract energy directly from surface waves or from pressure fluctuations caused below the surface. Analysts studying renewable energy argue that there is enough energy in the ocean waves in order to produce up to 2 terrawatti of electricity. (A terawatt equals a trillion watts.)

However, wave energy can not be harnessed everywhere. Areas rich in wave power are found on the western coasts of Scotland, northern Canada, southern Africa and Australia and north-east and northwest coast of U.S. Only in the North West Pacific it is possible that wave energy to produce 40-70 kilowatts (kW) per 1 meter of coast.

Technologies for obtaining energy from waves

Wave energy can be converted into electricity through systems located offshore or onshore.

Offshore systems are situated in deep water, usually showing a depth greater than 40 meters. Are sophisticated mechanisms that use wave motion to produce power for a pump that creates electricity.

Other offshore devices use hoses connected to floats floating on the waves. The rise and fall of the float stretches and relaxes the hose, raising the water pressure which in turn rotates a turbine.

Specially built ships also can capture wave energy offshore. These floating platforms create electricity by passing waves through the internal turbine and then back to the sea.

Oscillating water columns: oscillating water columns made ​​of partially submerged concrete or steel structures that have an opening to the sea, below the waterline. It includes a column of air above a column of water. When waves enter the air column, they cause the water column lift, then her fall. This alternation compress and depressurize  the air column. As the wave retreats, air is drawn back through the turbine as a result of reduced air pressure on the ocean side of the turbine.

Tapchans: or conical channel systems consist of a conic channel leading into a reservoir built on the rocks above sea level. Channel narrowing cause waves to grow in height while moving toward the face of a cliff. Waves flood the channel walls in the tank and the stored water is passed through a turbine.

These devices consist of a rectangular box that is open to the sea at one end. A hinged piece is placed in the opening  and wave action cause the flap to swing back and forth.  This movement powers a hydraulic pump and a generator.

Although the potential of technologies that use ocean energy is considered to be very high, there are no clear studies, to date, to determine an accurate assessment of resources. Instead, the world is funding several projects based on obtaining and using resources from the energy generated by ocean water.

Video Playlist of technologies used to obtain Energy from the Oceans