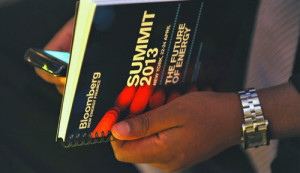 In 2013, investments in renewable energy worldwide fell for the second consecutive year, reaching 214 billion, 14 % less than in 2012, shows new data released by Bloomberg New Energy Finance released at a summit that held in New York this week.

While investment declined, as happened with the total amount of renewable energy installed worldwide, falling by almost 7 % in 2012-2013.

Energy clean out a billion tons of pollutants from the environment.

On the other hand, even if they were installed last year, fewer renewable energy systems (excluding large hydropower projects that have not been BNEF analysis ), we used a larger amount last year: renewables have represented 8.5% of all power generated worldwide in 2013, compared to 7.8 % in 2012.

BNEF estimates that renewable energy avoided the emission of about 1.2 billion tons of carbon dioxide emissions equal to removing the 252.6 million cars in circulation.

There are two reasons why clean energy investments worldwide are declining. The first reason is the fact that 80 % of investments due to declining cost of green technologies, solar panels first, says Michael Liebreich, Chairman Advisory Board BNEF.

The cost of a residential solar system in California, for example, fell by one third in 2010. Remaining 20 % is due to the decrease in construction activity and the uncertain fate of government subsidies, particularly in Europe.

However, Liebreich said that Bloomberg data on annual plants suggests that future investments in green technologies around the world are likely to increase Panne 37%, equivalent to 112 gigawatts by 2015.

Global trends have not been evenly spread across countries. Even if China's overall investment declined, it still managed to exceed, for the first time  the amount spent by all Europe, while countries with a stagnant economy, such as Spain and Bulgaria, reduced spending on subsidies for investors in clean energy.

China is the largest investor in renewable energy in the world, investing $ 56 billion in 2013 (United States made ​​a total investment of 35.8 billion U.S. dollars ).