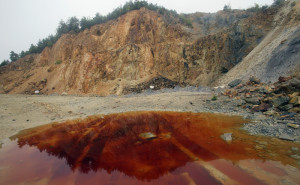 " The vast majority of investments are in machinery, equipment and reagents to be imported high complexity. RMGC Mining is focused on the extraction of gold by cyanidation leaching and export – requires no metal in Romania or the development of new technologies in the field.

Also these investments are strictly related to the period of operation of the mine and the industry itself, there are investments that can lead to a spread of economic growth in the region by reinvesting profits, "explains Silvia economist David in an interview with The Epoch Times. The expert adds that no environmental security is not sufficient to cover damages.

Epoch Times: Government Ponta insisted on the economic benefits of mining project RMGC – jobs, state budget revenues from taxes and investment in the economy and mining royalties. How real are they, in your opinion, that economist ?

" Economic benefits " of any activity taken as such criteria are very vague, if not put into balance project costs – financing costs, environmental costs, securities, advantages and disadvantages of the project compared to alternatives. These calculations and scenarios are particularly important for projects of this magnitude.

Additional guarantee of $ 25 million for environmental risks is clearly insufficient since it must cover the "worst case scenario " breaking dam, which must withstand not only decades, but forever.

It would be interesting to compare the cost of financing ( interest ) for the investment in the project – which the duration of the project amounts to approx. $ 1.5 billion ( according to recent estimates RMGC not have the means to self-finance the investment ) and that they would get another investor for example the Romanian state. Currently it lends to better conditions in the capital markets than a private person who guarantees the loan to the project itself, and has no other assets.

But what about the cost on the environment ? Environmental warranty covers enough ?

Environmental costs can forecast not so interested in the project company taking calculations, but by comparison with similar projects and maintenance costs of mining sites with gold-silver mines ( by cyanide ) with similar size in Canada / America.

For example Summitville Mine in Colorado were mined 9.2 tonnes of gold and 320 tons of silver open pit – with a footprint of 2 km ² and rehabilitate the U.S. state cost USD 170 million, according to a report from the Agency for Protection U.S. Environmental in 2012. Rosia Montana mine will process 300 tons of gold, 1600 tons of silver and has a footprint of 12 km square ( RMGC 's even leased an area of ​​43.82 km square ), thus having an impact at least 6 times higher ( water, soil and aquifer area directly affected ).

The economic benefits to the Romanian state ( given the current quotation of gold ) are handled in the context of direct benefit 2.3 billion and 2.9 billion indirect benefits throughout the project – which will therefore be received in 16 years. These figures seem unrealistic.

According to calculations RMGC – direct benefits consist of USD 600 million and 1.7 billion royalty share in profit. Profit may vary and will be strongly influenced by the cost of financing, operational costs, etc.. These decisions are determined by the majority shareholder who will control three quarters of the Board RMGC. In this context profit can be reduced to a minimum with the Romanian state to have real control in this case.

Do not forget that RMGC not owned directly by Gabriel Resources, but the other two interposed companies, both based in tax havens that allow various structuring and financing operations to " optimize " cash flow and profits resulting the project, the investor. Gabriel Resources, in turn, is owned 61% of hedge funds ( specializing in this type of operation ), 26 % listed on the Toronto Stock Exchange and only 13 % owned by a mining company: New Mont Mining.

Indirect benefits are 2.9 billion and consist of state budget revenues from taxes and other expenses that the company will perform in Romania, wages and investment.

The structure of the company allows to reduce corporation tax to a minimum. Utility consumption, specified as an indirect benefit calculations RMGC obviously is not a benefit but a cost factor for the economy resulting in increasing prices for small consumers, which is signaled by a report from the Academy of Economic Sciences this topic published in 2010.

How big would be the benefits of investment and wages ?

Investments – the vast majority are in machinery, equipment and reagents that are highly complex and will be imported. RMGC Mining is focused on the extraction of gold by cyanidation leaching and export – requires no metal in Romania or the development of new technologies in the field. Also these investments are strictly related to the period of operation of the mine and the industry itself , there are investments that can lead to a spread of economic growth in the region by reinvesting profits and generating added value.

Wages are only part of this long string tangible indirect benefits, but here it is quite clear that higher wages will go to foreign specialists or people in management and investment and will create added value for the area. In addition, the period is strictly limited, with no prospect of further work in that area after the closure of the mine for locals and a minimal or even negative impact on adjacent industries, on environmental grounds.

Environmental security is sufficient in this context ?

Of course, if at the time the company that operates it declared bankruptcy and if it has cash to complete. However, this guarantee is insufficient for a site of this size, where rehabilitation would cost at least a few times more.

Additional guarantee of $ 25 million for environmental risks is, in my opinion and by comparison with similar situations clearly insufficient since it must cover the "worst case scenario " breaking dam (which must withstand not just decades, but forever ).

For accident at Baia Mare, Hungary has asked the Romanian state compensation of 100 million dollars, according to Mediafax ( in 2000, inflation- indexed amount ), the amount discharged was 100,000 m3 of contaminated water, but TMF Rosia Montana is expected to have a capacity of 250 million m3.

Of course it will be argued that it is the same concentration of cyanide, but not talking about other heavy metals, toxic compounds and their quantity or concentration of the fact that the figures of cyanide in waste water conveyed by RMGC not technologically feasible, according to a report by the Romanian Academy.

How does mining afect other local fields such as agriculture, food industry ?

In the assessment of alternative possibilities – either extraction procedure, either in terms of encouraging activities in other segments (which requires much smaller initial investment ) – they should be considered in the most serious way. I am not experienced any case where a surface mining area and a pond with toxic compounds, has turned into a tourist area or provided a benefit to the development of agriculture or the food industry.

Instead there are countless cases of abandoned projects after extracting metals from ore or massive richest sites in poor closed after the investor has declared bankruptcy.

This risk is greater if RMGC, which is not assured and is owned 80.69 % percentage ( 75 % ago renegotiation and increase state participation ) of a company without assets and environmental warranty does not cover the further risks.

Silvia David is an economist and holds an MA from the University of Economics and Business Administration in Vienna.