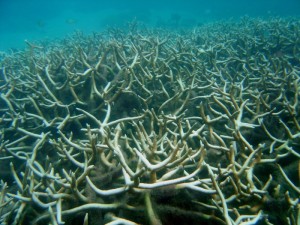 Ocean acidification refers to the increase in acidity of sea water due to increasing concentrations of carbon dioxide.

Essentially, not all of the carbon dioxide that mankind emits remains in the atmosphere.

In fact, a fairly large portion enters the ocean and this reduces its pH which increases its acidity as a result.

Will Cause Coral Bleaching

Consequently, ocean acidification may cause a reduction in the calcification rates of calcifying organisms which include corals, mollusks, algae and crustaceans.

By reducing the calcification rates of corals, ocean acidification will in turn cause coral bleaching.

Although climate change and ocean acidification are two very different environmental issues, they share the same cause: carbon dioxide emissions.

In essence, by reducing our emissions of carbon dioxide, we will not only mitigate climate change, but we will also help stop ocean acidification.

Although ocean acidification may sound like a trivial issue, it is not.

Millions of marine species depend on coral colonies and many of these species lie at the bottom of the oceans' food chain.

When coral reefs are bleached, all marine species are affected since they all depend on one another.

If mankind fails to reduce its CO2 emissions, our oceans may one day turn into marine wastelands deprived of any signs of life.