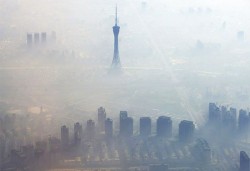 China has long pursued economic growth at any cost, but ignored the problems they may face because of pollution. Prime country now promises radical measures to solve this environmental problem.

Speaking at a meeting recently held in Beijing, the country's premier Asian, Li Keqiang, declared war on pollution, says CBS News. At the meeting, attended by 3,000 people, was presented a detailed report on several areas.

Topics covered have involved national defense, China's development and pollution problems. Li Keqiang wanted to say that the nature of China sent an emergency signal about his country's desire to grow as much.

He is now a supporter of protecting the environment and is willing to do everything possible for this purpose. The Chinese government is planning the closure of 50,000 small coal-fueled furnaces, increase energy efficiency and reduce emissions of cars.

Keqiang said the old cars that pollute the environment than would be withdrawn from circulation. The level of pollution in Beijing is currently one alarming. In 2013, China recorded many days in the big cities were covered in smog, a phenomenon that has never had such intensity in the last half century.