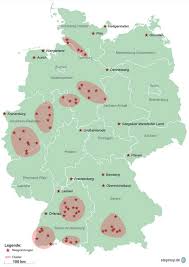 As this map shows, municipal utilities have been created over the past eight years in clusters, all of which are in the western parts of the country.

In the east, the wave of municipal takeovers largely took place in the 1990s, partly driven by German legal expert Peter Becker, who later founded the Zeitschrift für Neues Energierecht (Energy Law Journal), which is now a standard reference work read throughout the EU. Becker represented 146 eastern German municipalities in a high-profile court case he won in the early 1990s.

A new study published in German by the Wuppertal Institute reviews not only the quantity of towns that have bought back their local power providers, but also the quality. Are consumers and local citizens better off under local ownership, or does the private sector do a better job?

The new study (brief presentation in German and PDF of the full study, also in German) reviews the German trend towards community ownership of local utilities, assessing their performance based on 10 targets related to the energy transition, climate protection, and the local economic impact. The researchers find based on the 72 municipal utilities founded since 2005 that the likelihood of these targets being reached is “high to very high.” Not surprisingly, 81% of citizens surveyed say they trust their local municipal utility, compared to only 26% who said they trust corporations.

Specifically, municipal utilities allow communities to focus on energy efficiency, renewables, and distributed cogeneration without the need for nuclear and coal power. The study found that 60% of the installed capacity of municipals was cogeneration in 2012, followed by 28% thermal capacity (fossil) and 12% renewables – putting municipals at half the national level for renewables but also as the main driver for cogeneration in the country.

Nonetheless, expertise is a significant challenge, so the researchers recommend that communities carefully plan takeovers and work closely with legal experts and engineers from the energy sector – though not necessarily those who believe that municipal management won’t work.

The payback for communities is tangible when the local utility focuses on providing affordable energy reliably rather than increasing its returns.

The report comes at an especially crucial time; between 2010 and 2015, some 8,000 of the 14,000 municipal contracts in Germany are up for renewal. In the early 1990s, just after the unification of the former West Germany and East Germany, municipalities generally signed 20-year contracts, often with the private sector, for energy and water supply. But citizens were not always pleased at the outcome, and there is currently a wave of recommunalization in the wake of the financial crisis in 2008.

On September 22, citizens in Hamburg – Germany’s second largest city – will vote on whether to buy back their local grid. Likewise, citizens in Berlin – Germany’s largest city – will also soon vote in a plebiscite on whether to take over the local grid in the country’s capital. The study states that, in addition to newly founded municipals, at least 190 communities bought back their local grids during the period under review. (Craig Morris)