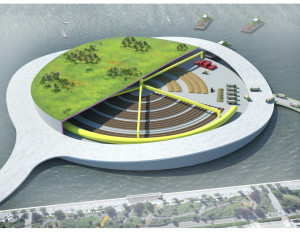 In 2012, New York City spent $85 million to send organic waste to out-of-state landfills. Since then, the city has been steadily expanding a curbside-composting program.
Last year, it collected organic waste from 30,000 households and this year more households have already been added to the program. But as the city collects more and more organic waste it will need to find more locations nearby to process the waste in order to achieve the program's stated goal of diverting "organic material from disposal for beneficial use."
Boring municipal talk, right?
Not if Present Architecture gets their way.
The New York-based architecture firm has developed a concept that would not only keep some of that organic waste — 30 percent of NYC's waste stream — local instead of trucking it to landfills in faraway places, but also create places people might actually want to visit.
The idea, called Green Loop, is a network of compost islands that float in New York's waterways and connect to the city's waterfront.
In addition to composting waste, these islands would also serve as green space with waterfront walkways.
"New York City has less open space per person than almost every major city in the country, and the Green Loop alleviates two major urban problems at once," the project's website says. The network of composting islands would provide New Yorkers with 125 acres of public space.
And below the elevated park is the composting facility.
We'll have to wait to see if this idea ever becomes a reality. And while it's certainly ambitious and maybe even a little crazy to imagine it ever happening, it's far from the craziest infrastructure projects proposed for the city.
More on the Green Loop concept.
[h/t Curbed New York]
Images: Present Architecture