Climate change is transforming the world as we know it and lead to a new type of refugees – people that are fleeing from climate change. Climate refugees. Article published with the help of our volunteer, Andreea.

If we think of how long people have been displaced from their homes because of extreme weather caused by climate change, it took really too much for the notion called "climate refugees" to become part of colloquial language.

Laxmi, 74, Bangladesh: "Aila Cyclone left me with nothing, and was the most destructive cyclone that I have seen in my life."

Pope Encliclica was published on June 18, when he spoke of "the tragic increase in the number of migrants seeking to escape the increasing poverty caused by environmental degradation."

But the one who gave to the therm a serious approach was John Kerry US Secretary of  State, when he told the US ambassador last month, "will be climate refugees and you will have to face them at one time. If not now, in the not too distant future. "

However, he is wrong too "not too distant future" implies that this is something new. In reality, that people fleeing the destruction caused by man-made climate change was already ingrained in our collective history.

An inhabitant of Kiribati – John Teitiota is prepared to advocate for climate refugee status to the Supreme Court of New Zealand, his case reflects the plight of the millions of inhabitants of small islands. His story is a familiar one for those who follow the connection in the increasingly close link between extreme weather phenomena and deformed climate patterns.

In early June, people from communities affected by climate from Tuvalu, Kiribati, Fiji, Solomon Islands and the Philippines said they would seek "Climate Justice" and that will make the biggest polluters to take responsibility and assume the stimulation of climate change. Elma Reyes, along with Greenpeace Southeast Asia and other local organizations, guides the Filipinos in demanding an investigation of major carbon pollutants by the Philippines Commission on Human Rights.

Greenpeace ship Rainbow Warrior recently delivered material aid in Vanuatu after the island was devastated by a cyclone assigned by the president on climate change. 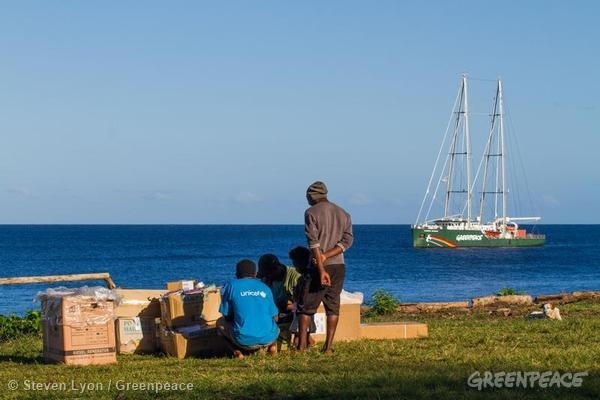 People in the village Panita, Tongoa Island, with food from Rainbow Warrior. Tongoa is one of the outer islands of Vanuatu state, hit by Cyclone Pam in March 2015.

However, people in small island states are not the only ones who are forced to leave their homes due to cyclones and rising sea levels – both the result of burning fossil fuels at a greedy pace by rich countries.

The places where these tragedies happen are far apart, but the people affected have all things in common. Their lives were transformed into a daily struggle to survive with insufficient resources and with little money. And they are victimized by those in distant places that have a much higher quality of life and would prefer not to notice.

We have a new scientifically verifiable certainty on climate change. We have the popular recognition and increase their connection with extreme weather. This gives us a new optic through which we can see the past and what force people to leave not only their homes but also their families, traditions and, often, ancestral rights. 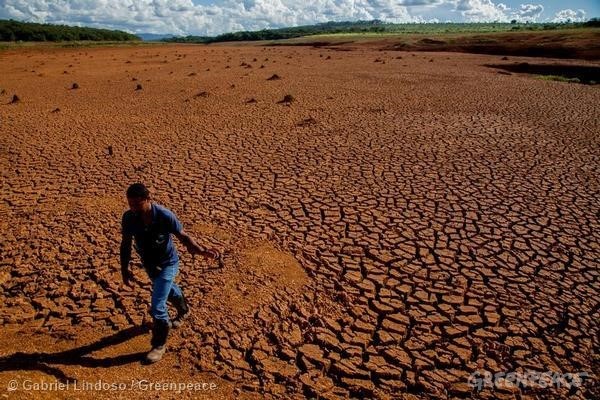 The "climate refugees" have a ubiquitous name for the 22 million people who were displaced in 2013 because of what the United Nations refugee agency calls "natural hazard events".

How do the figures look like in terms of future climate migrants ? Grim. As Immigration Minister says, from UK opposition, Chris Bryant in September 2013: "You can imagine that the United Nations estimate 200 million of such refugees, more than the current number of migrants worldwide, would be almost correct. "These words repeat what colleagues at Greenpeace Germany supported in 2007.

This is why Greenpeace calls for new financial commitments from the Green Climate Fund to reach 15 million – because developed nations, consuming excessively, are those which catalyze the awful chain reaction leading to mass displacement of the population. The fund is the least significant way in which countries that burn fossil fuels, and create climate change, climate and environmental disasters, drove them out of the places where people live, assume responsibility by paying to mitigate the damage they have caused indirectly. 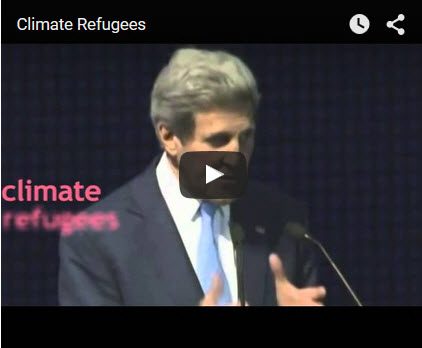 Note: This blog has been edited since its first publication to include a link to a statement and a petition of affected communities in terms of climate.

Arin de Hoog it's from Ottawa, Canada. Trained as a financial journalist, he worked as a producer, reporter and announcer for various radio stations.