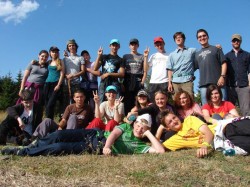 In the broad sense , is what makes a volunteer activity in support of someone consciously and deliberately, without being rewarded material. Yet in states where there is a tradition in this sense, the volunteers also features some recognition from the point of view of professional training, personal development and experience in a particular field.

In recent days, volunteering returned to public attention by appearing discussions on amending the current law. The new law, which is now in parliamentary debates aimed at voluntary and mandatory contract between the host organization as a volunteer recognition award of a certificate of professional experience and skills acquired through volunteering.

In the review of the legal framework formed a number of arguments as the low percentage of volunteers that are registered in Romania compared to other European countries, where the number of volunteers figure, in 2011, about 100 million, according to European Commission data.

The main changes in the law Volunteering

Legislative proposals initiated by Mihai Sturzu are debated in Parliament, and brings three major changes of volunteering activity: requirement of a contract between the volunteer and the host organization, which will lead to the empowerment of both parties, recognizing volunteering as work experience, a provision already in most EU countries, indicating that professional experience will not mean extra years of work in the age pension calculation, but will give a plus when hiring especially for young graduates.

Among the supporters of the law include the Secretary of State for Health Raed Arafat, who initiated the Targu Mures SMURD service " started from a core of volunteers ." It has expressed hope that the initiative will be published and implemented by the end of the year. "You have to understand , including at the state level that volunteering is not free, cost of investing in volunteers to develop cost of investing in volunteers to prepare, but once you got it, the benefit of the state is much more than investment. Why I say that this is one excellent initiative that solve some problems very well targeted, "said Arafat on Tuesday.

He showed that the recognition of professional experience in the case of voluntary activity is the minimum that can be done voluntarily, showing that it is very important that volunteering to be recognized to differentiate candidates. " We need regulations to encourage, help the volunteer to be fully exploited," said Arafat .

Volunteering your culture, tradition, cultivating this sense it in the family, at school, in the community. Over time, the idea of ​​volunteering was associated with the idea of ​​charity, to do good to someone, to have a piece of bread spread or material help. But the concept of volunteering, by many definitions related, is the availability of a person " to provide, at its own initiative, during or for the benefit of others, without receiving material compensation ' ( definition adopted by the National Council for Volunteering in June 2002) .

Volunteering may be of public interest or for the benefit of disadvantaged people in areas such as health and social services, protection of human rights, healthcare, cultural, artistic, educational, scientific, humanitarian, religious, philanthropic, sports, environmental protection etc.

Volunteering beneficiaries alike, both those actions are voluntary, and those for which it is made​​, resulting in a better final social cohesion, a better standard of living in all respects.

Orthodox Faith promotes volunteering through mutual aid neighbor, seen through the love of God, because "doing good " is an exercise Christian principle of love in Christ. "Doing good is an eminently Christian exercise, good is the principle of love in Christ: Christ, God and Man at the same time that comes and shows us clearly neighbor service model.

Volunteering is an activity that should manifest daily to be a way to living the good perspective. But without Christ sake has no value because it is only made for reconciliation own conscience, "said Ms. Denisa Manoiu, professor of religion at the" Costache Negruzzi "Iasi , involved in the development of numerous volunteer activities with students all ages.