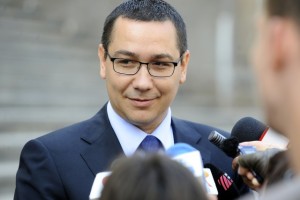 Victor Ponta announced the possibility for the state to give up control of TRANSGAZ a strategic company. Pros and cons disposal of majority shareholders stake on a company that is definitely a matter of national energy system.

Transgaz and Transelectrica strategic companies are responsible for the safety of the national energy system. In addition, companies that hold a natural monopoly, the only owner of the electricity transmission licenses or natural gas.

However, Prime Minister Victor Ponta believes the state should not remain with the majority 58% stake, which can reduce their participation to be attracted for new private investors. Please note that at this time, the government owns 58.5% of shares, the rest being at private shareholders. See what could be the pros and cons of quitting asbolut state control over a strategic company.

As shown in several rows, the state is a bad manager of public companies. Instead, private investors would have an incentive to make a profit as possible, and to achieve such an objective would call certainly good management. It would also be much less influenced by political decisions. The company might develop more effective and would be able to increase investments, which the national economy would be a plus.

TRANSGAZ is a company of wich depends very much the nationwide safe energy system. In crisis, private investors would be those who would make the decisions, not the state. Basically, national interest would learn from their hand, even if the state has the biggest stake of all shareholders individually.

Assuming that it would take a package of 49%, there may be some situations in which all private shareholders will ally, forming 51%, to take decisions contrary to the rule in AGA. We can mention that the privatization of majority stakes in energy companies was even the subject of discussion in CSAT, on September 25, 2007.

On that occasion, President Traian Basescu said the state must retain a majority stake in companies considered strategic. "I thought is better for the government to keep its majority in units such as Transelectrica, Romgaz, Transgaz Conpet and Oil Terminal, companies that we consider strategic. But beware, i talk of keeping the majority," said Basescu in 2007.

Given that there is great tension in the area because Russia controlled release seems to be opportune. There may be times when decisions must be made to counteract any games of Russian gas market.

An example is the decision was in May when TRANSGAZ signed an agreement with Exxon and Petrom for all gases that will be produced in the Black Sea – to enter in the Romanian transport system. The agreement was signed in the conditions in which the Austrian company OMV, majority shareholder of Petrom gas producer, has agreed with Russian giant Gazprom Russian South Stream gas pipeline extension to Austria.

Immediately after being initialed understanding between the Russian and Austrian company, appeared information that the gas will be exported to the Black Sea, from the moment they will start their operation by Russian South Stream pipeline. Basically, there is a danger that much of the amount of gas that will get Romania in the Black Sea to go directly to the Russian pipeline.

According to some estimates, there are chances that the gas production from the Black Sea to be about 6 billion cubic meters of gas per year from 2018-2020. Now in Romania, the annual production is about 10 billion cubic meters, the main producers being ROMGAZ TRANSGAZ. Otherwise said there are some moments when the state must have sufficient leverage to intervene.

The South Stream, Russia wants to increase its power that it has on countries that import gas from Gazprom. EU opposes attempts to expand Moscow's influence in the South Stream pipeline.

Moreover, the European Commission adopted a firm position in this matter, claiming she would not negotiate before the construction of the Russian-Ukrainian conflict. Even if South Stream is officially blocked, Russian President Vladimir Putin has asked its allies to act "behind the scenes". Moreover, an EU member state heard urging Russia. It's Hungary.

Hungarian Parliament has prepared a legislative amendment that would allow the construction of South Stream gas pipeline on the territory of the country without the need of consulting the European Union or other international institutions.

But it remains to be seen how "obedient" to be and the other countries with which Russia has bilateral agreements for the construction of the pipeline: Bulgaria, Slovenia and Serbia. In September, the European Commission again urged Bulgarian authorities to suspend work on the construction of South Stream gas pipeline, warning of possible sanctions against Bulgaria.

South Stream pipeline project involves the transport of natural gas from Russia under the Black Sea to the countries of southern and central Europe.

TRANSGAZ is involved in the pipeline project linking Romania to Moldova. It is known that Moldova is 100% dependent on Russian gas, and pipeline Iasi-Ungheni was built precisely to there is another alternative. The second phase of the project would extend the pipeline to Chisinau.

This project is not just to please Russia, which is why a number of obstacles put by Moldova transgaz transport company, controlled by Gazprom.

TRANSGAZ monopoly. There is another gas transmission company in Romania, there is no competition in this area. In addition, fares are regulated by the National Energy Regulatory Authority (ANRE) that are not established by the Company.

Basically, you can not make a comparison between majority privatization of state energy companies who compete with the privatization of a majority stake in a company's strategic natural monopoly. Recently the stock was privatized majority, 51%, power distributor Electrica SA.

But Electrica SA is not the only distributor in the country. There are former state distributions following the privatizations of previous years were taken by ENEL, E.ON and CEZ.

It also emerged from the Property Fund shareholders TRANSGAZ, selling package in December 2013 that he held 15%. Process the transaction on the stock exchange last year was not exactly a success, given that the state has collected only 72 million a 15% stake.

The sale price of the shares was 179 lei / share, 16% less than the price of a stock is traded on the stock market before launching the offer. In addition, money earned diid not went in the company, but in the state budget.

At this time, the company is managed by a private management. If you want performance as PM says there is a lever at hand: to be left to private managers to develop the company and eliminate any inappropriate political pressure.

We mention that Victor Ponta said on Thursday at the headquarters of Transgaz, the Government should not remain with the majority 58% stake, which can reduce their participation to attract new investors to allow private company to develop.

"If it is good for the company in the future to develop, i do not believe that the Romanian Government must remain with 58%, and it may reduce its stake, we can attract new private investors that will allow you to develop further.After all there are many governments that hold minority stakes in companies, those companies are developing well, with management, with all the standards we apply a transparent company and performance in Europe of 2014, "said Prime Minister, on Tuesday.