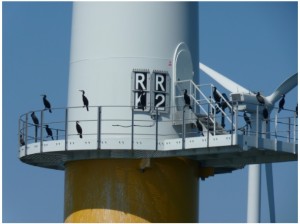 Renewable energy consultancy Natural Power has published the results of a post-consent ecological study, called the Marine Environment Monitoring Programme (MEMP), that monitored marine life on a UK offshore wind farm. The study has been ongoing since 2007.

Key findings include a lack of significant impact on birds, sea mammals and benthic organisms (small creatures that live on the sea bed, such as sea slugs, worms and cockles) even during the construction phase, the consultancy said.

MEMP covered the wind farm’s preconstruction (2001-2007) and construction (2007-2010) phases and first operational year (2010-2011) and recorded any changes to the physical and ecological environment, concentrating on areas where there was uncertainty about the effects of the wind farm on the marine ecology.

There was no significant or permanent effect found on non-migratory fish in the surrounding area, said the report, although fish numbers varied during construction. But the report said the fish population ‘did not show any considerable change’ during construction periods compared to the baseline numbers. Dr Jane Lancaster, one of the report’s authors, explained that fish numbers did drop off during the first construction year, but she emphasised that there was no evidence to show this was due to the wind farm because very little construction actually took place during that period due to a problem with the piling barge.

The Solway Firth is “a naturally mobile environment consisting of shifting sandbanks. The shifting sandbanks were probably the biggest driver behind the drop in fish catches from baseline condition,” she said.

The report also cited a change in the benthic fauna population, but Lancaster again emphasised that this was due to natural cyclical changes rather than the wind farm, and that there was a greater change in benthic fauna between baseline and preconstruction surveys than during construction. “The ecology was still typical of the Solway, so it was a coincidence,” she said, clarifying that the tide in the Firth moves very fast, creating a constantly changing environment. She also pointed out that the study found no difference in benthic fauna population between the wind farm site and the surrounding areas.

“Because it’s such a dynamic environment, the animals that live there are robust and can cope with change,” Lancaster explained. Fish and small sea creatures “are not particularly sensitive,” she continued, stating that “studies on other offshore wind farms have shown that sometimes there can be a slight dropoff in fish numbers during piling as a result of noise, but they soon return as soon as it’s finished, and the studies show that they like wind farms – there’s less fishing, more hard structures, and more food,” she said. Fishing is prohibited for 500 meters around the Robin Rigg wind farm for safety reasons.

The consultancy also reported no significant or long-term effects on the main bird species in the area, the common scoter and the red-throated diver. During the operational year an increase in cormorants and seagulls was observed around the wind farm. There was no evidence found of a decline in the numbers of harbour porpoises or grey seals, although a possible avoidance of the wind farm area during construction was suggested by density maps, said Natural Power. During the next stage of the analysis the researchers say they plan to investigate this phenomenon further.

An average of 3.4 bird collisions with wind turbine blades was predicted per year prior to construction. MEMP analysis, carried out with boat-based surveys, focused primarily on seabirds and offshore water birds, and the majority of birds were found to be flying below rotor height, said Chris Pendlebury, principal ecologist at Natural Power. He emphasised that assessment of collision risk was not the main aim of the study, since collision predictions were low. The report suggested that collisions be re-addressed once the data from the second operational year are available.

MEMP seems to confirm previous reports, such as a 2011 Dutch study sponsored by NoordzeeWind, a joint venture between Dutch energy company Nuon and Shell Wind Energy, which looked at the environment around the Egmond aan Zee wind farm off the Dutch North Sea coast. The researchers claimed that the study not only showed few negative impacts, but overall positive effects on marine life from the wind farm.

As did Natural Power’s study, the Dutch research found increases in cormorant and gull populations in the area while several other bird species tended to avoid the wind farm. Minor effects on fish movement were observed around the monopiles, the study reported, while some fish seemed to find shelter inside the wind farm. More porpoise clicks were recorded inside the farm than in the reference areas outside it. The study also claimed that wind farms could constitute a new habitat for seabed-dwelling creatures such as crabs, mussels and anemones. “The new hard substratum of the monopiles and the scouring protection led to the establishment of new species and new fauna communities,” the report said.