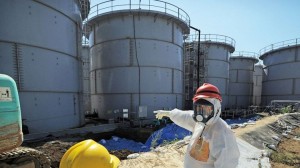 Japan will invest hundreds of millions of dollars in building a wall of ice around the Fukushima nuclear plant to stop radioactive water leaking, BBC informs.

At present, the water is pumped to cool the reactors, but storing quantities of radioactive water has proved too greater challenge for Tokyo Electric Power Company (Tepco), the operator of the Fukushima nuclear plant.

Government has decided that it is essential to get involved, "said Suga.

Under the government plan, a frozen mound will be created around the reactors using coolant pipes to prevent groundwater coming into contact with contaminated water resulting from the process cooling fuel rods

Dr. Tatsujiro Suzuki, vice president of the Japanese Atomic Energy Commission, told the BBC that the situation at the nuclear plant was an "unprecedented crisis" that has continued to depreciate.

He said the plan to freeze the ground around the site was "a provocation" and took a permanent solution. The technique was used only on a scale not for radioactive contamination, he added.

Last month, Tepco said that 300 tons of highly radioactive water leaked from one of the storage tanks.