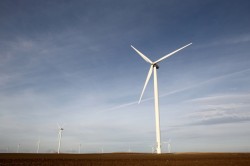 American Superconductor company will open a factory in Timisoara, where it will move some production of wind turbine components fromthe operations it has in China, part of a larger plan to restructure and reduce costs.

The plan provides for " the transfer of the production capacity of electronic control systems for customers outside China at the company's factory in Suzhou China, to a new production facility in Timisoara, Romania ", said in a document sent by American Superconductor American scholarship.

The factory in Romania should become operational during fiscal year 2014, which begins in April.

While production facilities in China will continue to serve the Chinese market, the number of employees will be reduced as a result of opening new production center in Romania.

American Superconductor plans to close a plant in Wisconsin and move production to Massachusetts, which already has operations, including the company's headquarters.

Following these measures, American Superconductor expects to record cost savings of $ 3 million annually from the fourth quarter of the next fiscal year.

The restructuring plan will affect up to 120 employees, including China. As a result of the need to relocate some jobs, the number of jobs lost will be at about 5-10 % of employees in December.

The company has several ongoing trials in China against Sinovel local company accused of economic espionage.