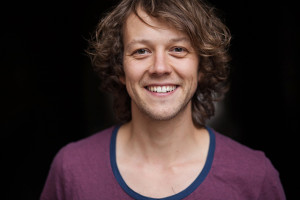 What would happen if I should no worry about everyday life ? Did people would stay with their asses in a chair all day or would do something important with their lives? Michael Bohmeyer, founder of a technological institute in Berlin, wanted to know the answer to this question.

After working up early to live with the profits of 1300 dollars he produce each month with his business, Bohmeyer says that his life changed. So he started a new initiative called "My income base," seeking to raise enough money to be able to pay someone 1300 dollars a month for a year, without obligation.

The system crowdfunding initiative already collected more than the 16,000 dollars that was needed. On September 18, will be announced the lucky winners of the amount of money at a party in Berlin.

I talked Bohmeyer what he thinks might come of it, and how was life changed now that he no longer needs to work.

VICE: You say about you that you are a lazy person ?

Michael Bohmeyer: I would say this, but I think that being lazy is not necessarily a bad thing. Other people probably would not describe it as lazy. I work a lot - even more now, you do not have to work for money. I really discovered a passion for dishwashing.

You said you have available basic income unconditionally changed your life radically. How so?

After I decided not to work this year and I started to live with the approximately 1300 dollars that produce my company, all I wanted to do was to sit with my belly at the sun and do nothing. However, I found a strong impulse to do things. I have a million ideas for business, i take care of my daughter and I work for a radio station of a local community. Buy less crap, live healthier and i am both a lover and a better father.

Because you have more time for friends and daughter ?

Because i am much more careful. There are squeezed. Working conditions were great even before, because I own the company and could do basically everything that I wanted. But I was conditioned by the need to make money. Now i do what I do because i choose - and suddenly everything became twice as fun.

Are you ever bored ?

So when you quit working for money, you started to work like crazy. Pretty ironic.

Absolut. It's funny and how we got here. Initially, after I quit working for pay, I thought it would be right to find a new project. I rented an office, I made a list and I appeared there in the morning. Once I was so stressed about a month without diong much, I thought, "Wait a minute. What am I doing? "So I actively persuaded to do nothing for a month - I looked at the sky, no phone, no books, nothing. It was physically painful. But after a while, I did.

Want someone to assure a basic income of 1,300 dollars for one year, without obligation. What do you hope to prove or discover with this ?

I was quite surprised at how it changed my life when I have not had to work. I would be presumptuous if I was based on my experience, but I think everyone has a fabulous potential that could be unleashed if it would not have to worry about income. Do not get me wrong, I believe that making money is great

To work and be paid for it - it's great. But working for the sole purpose of making money. I'm bored of the debate on this and the lack of any conclusions from them. So I thought: let's try this and see what happens instead of waiting after politicians.

With crowdfunding you managed to gather so far almost 32,000 dollars - enough money to fund two average salaries for one year. That means two people who will not even worry about there. However, that does not say much about what would happen if noone of us takes care of that.

Of course, my project is absolutely stupid for two reasons. The first is the limit of a year, which means that we'll have it again anyway to somehow earn your living after one year. Secondly, of course it's a big difference if only I did not have to worry about daily living or if no one takes care of it.

So it's by no means representative. But even helps us understand what it means to have a basic income. And talk about it. Because it's not just about the two people who will win this thing. It's about the 21 000 people who have posted on the site what would make if they had the money. They say they will not idle. They continue to work, but without much stress both - they would like to volunteer or to set up theirs own company. I think things would be beneficial to society.

So what do you think would happen if we all receive a basic income starting tomorrow?

Initially, it would not change much. But in long term, I'm sure people would start to make free choices, without pressing economic plan. Would choose based on what they want to do. Would have time to think about what they want to do or what they know. For now, all we stress to finish school and get a better paid job.

Ok, talk about people dealing with university degrees are expected not only to be able to pay the rent of salary, but as the job to be liked and to perform. And then what to do with underpaid janitors who clean the toilets or the call center's or those who care for the elderly?

I am not speaking only of the privileged. Anyone with a basic income are in a better position when negotiating with employers. The guy who cleans the toilets can say, "Mister, I do not accept that money." And the employer could say, "Let's automated cleaning toilets."

Yes, but you can not automate the jobs of those who care for children or the elderly.

Right. In these cases, people have to wonder what it's worth to society. We need to increase the salaries of these people. It's important to have clean toilets. It is important to care for the children properly - and yet these people are underpaid.

I'd like to work in a kindergarten. But if you compare that with a job in the IT field, I wonder if it's worth. If I had a basic income, I could still take advantage of this option. And I'm sure I'd do better as a kindergarten teacher than as IT-ist.

The group of people who support a basic income for everyone is very diverse - from leftists, members of the Green Party antroposofists to German Liberal Party members. Where do you fit in this spectrum?

Nowhere. Basic income does not fit into this chart right to left. It is partly socialist, because the program requires equality for all. E and individualistic, because it demands less bureaucracy. It's neither right nor left; is a third way.

Today, politicians use it as a socio-political tool to manipulate people to do what they want. I think this strategy was outdated and no longer works. Let's give people some money and see what they will do if they have this freedom to decide.

What are you trying to prove by this?

I think we can geta change, if we let people build their own change. Can you force people to do something they do not want to do, but you can not convince them. And especially, you can not force to take jobs that do not exist.

"The Myth of employment entire population who has no idea that job no sincere effort". What do you think about this?

It sucks. In modern capitalism, it is not possible for all to have a job. It is necessary to have a reserve army of unpaid labor force to keep the underpaid as it is. Paid there are not enough jobs for everyone. Meanwhile, forces people to take jobs that do not exist. It is cruel.

What other myths bothers you?

People say: "Of course I would continue to work even if I have a base salary provided, but others will not do that." From here I want to start. I want to prove that almost all people would do something useful with their lives if they had some money make monthly - you're just not that smart and hardworking. People will they to contribute to a better world. You just give them the chance.

People say a lot of things when you ask them. That does not mean they are going to take their word.

Course. But if you look at the 1.4 million people in Germany who could be based on unemployment, but still prefer to work while wages barely ensure there - I would say with conviction that people are lazy in general. Even in the current system.