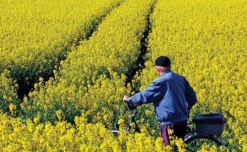 The demand for biofuels is increasing; this can lead to massive deforestation for growing plants used as raw material, and increasing the amount of CO2 in the air – that would otherwise be absorbed by trees.

That’s why EU wants to use biofuels made from wastes and residues. The environment and energy committees in the European Parliament discussed with experts the proposal of the European Commission to limit biofuels produced from crops. "I hope that in future we will not have to choose between what we eat and how we drive," said in the workshop, the rapporteur Corinne Lepage (Alliance of Liberals and Democrats for Europe, France).

The rapporteur of the Committee for Energy, the Spanish Alejo Vidal-Quadras, from the European People's Party (Christian Democrats), said: "We know that biofuels, as an energy source, has some problems. Replacing cultures is one of them. Promoting advanced biofuels will reduce changes in land use. "

The biofuels produced from wastes and residues have less impact on the environment, have no effect on food prices and do not replace other crops or forests, says the European Commission. But they are not yet produced commercially, said Mr. Raffaello Garofalo, from the European Committee for Biofuels within the debate. Their development could accelerate, with public support, after 2020.

The commissioner for Climate Action, Connie Hedegaard, acknowledged that advanced biofuels are not yet well developed, primarily due to production costs, and that they should be promoted, as a durable solution.