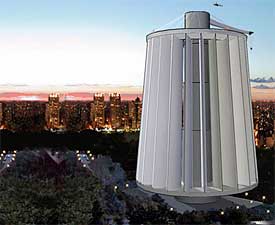 The word "maglev" (for "magnetic levitation") is familiar from the area of transportation, where maglev trains provide faster and smoother movement for less energy cost than conventional trains. The same principle works to enhance wind turbine technology, too.

A maglev turbine is a wind turbine that uses magnets to reduce the friction that slows down the turbine blades in a conventional wind generator, wastes some of the energy being harnessed, and makes the wind turbine mostly useless in low winds. A maglev wind turbine can be used to generate usable energy with wind speeds as low as three meters per second. It can make home wind power more feasible, allow use of wind power in locations where it currently isn't worth using, and lower the overall cost of wind power generation to as little as five cents per kilowatt-hour.

The one drawback to maglev wind turbines to date is that no workable designs for large models that can generate large amounts of electricity have been produced in prototype. The obstacles to doing so are simply a matter of engineering, however, and these obstacles are likely to be overcome in the near future. In the meantime, maglev turbines, although expensive in up-front costs, are often the best choice for small-scale wind energy production especially in regions where prevailing winds are relatively low speed.

Maglev wind turbines look quite a lot different from conventional turbines. They usually have a vertical rather than horizontal axis and a large number of vertical turbine blades that look something like a Venetian blind folded into a cylinder. This design is more efficient at catching the wind than a conventional three-blade horizontal-axis turbine, but would encounter too much friction to be practical without the magnetic levitation involved.

Extravagant claims are flying around the internet today about maglev wind turbines, suggesting that they are as much as 1000 times as efficient as conventional turbines. This is probably not true even in potential, but maglev does offer the possibility of significant efficiency improvement and reduction in wind power cost. One downside of the technology is that the magnetic fields used in it cost electric power to operate, which reduces the net power production and raises the threshold of useful wind. Nonetheless, that threshold remains below where it is for conventional wind power even with the technology in its early stages of development.

As it is in so many fields of renewable energy, China currently is the leading producer of cutting-edge maglev wind turbines. Most maglev wind turbines currently on the market are made in China. There is good reason to expect this market dominance to continue. China became the world's largest producer of wind energy as of 2010. China's current five-year plan calls for 11.4% of China's energy to come from non-fossil-fuel sources and for the country to reduce its greenhouse gas emissions per unit of GDP by 17% as of 2015.