Currently, renewables make up 17 percent of final energy. About 9 percent of that is from â€œtraditional biomassâ€ and another 8 percent is from “modern” renewables like wind energy, solar power, geothermal energy, and biofuels.

How much renewable energy will the world consume in the coming decades? That depends on who you ask.

If you’re an oil company with a stake in the continued use of fossil fuels, you’ll probably downplay the penetration of renewables.

And if you’re an advocacy organization actively working to stop the burning of fossil fuels, you’ll likely project the highest growth of renewables possible.

The compilation of scenarios was published in the REN21 Renewables Global Status Report, a yearly assessment of the global market for renewable energy.

They reflect assumptions about technology readiness, abundance of fossil fuels, and the need to address climate change.

Not surprisingly, the oil companies don’t see much growth. Both ExxonMobil and BP (BP’s is not shown here) predict that renewables will account for only 15 percent of final energy between 2030 and 2040.

The International Energy Agency, which has historically underestimated the growth of renewables globally, issued a few scenarios in its 2012 outlook. On the lower end — even assuming new policies to limit temperature rise to 4 degrees Celsius — the IEA projects 27 percent renewables by 2035. The organization’s higher scenario, outlining what it would take to limit global temperature rise at 2 degrees Celsius, shows global renewables penetration at 41 percent by 2050.

It’s also not a surprise that Greenpeace is on the very high end. That’s because the environmental advocacy organization believes that fighting climate change will be the driving force behind global energy policy in the coming years and decades, forcing a much higher penetration than moderate scenarios might suggest.

So what does that growth look like on a regional level? The REN21 report breaks down projected shares of renewable electricity in different countries: 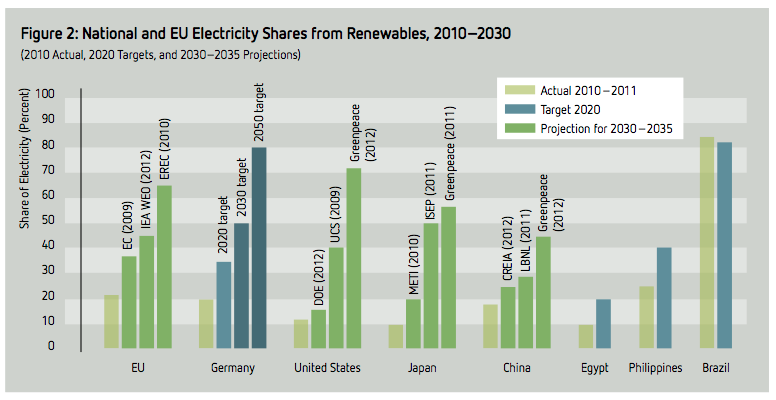 The renewable electricity scenarios above, which are modeled on different policy assumptions, are all over the map. For example, the DOE projection of 15 percent non-hydro renewable electricity for the U.S. through 2035 assumes no change in policy. On the other end of the spectrum, the Greenpeace scenario assumes a massive, all-hands-on-deck approach to deployment.

As of 2011, renewables accounted for 20 percent of global electricity production. Looking across the range of projections, the REN21 report concludes that a 40 percent to 50 percent electricity share is likely by 2030 if national policies stay aggressive.

But renewables will see much more modest growth in the transportation sector:

Biofuels only make up about 3 percent of fuel consumption globally today. And with targets in the U.S. and Europe driving continued demand, that share will definitely increase in the coming decades. But those increases depend on the competitiveness of unconventional biofuels, the scope of political backlash against food-based fuel standards, and the price of oil.

The multi-decade outlook for renewables is extremely varied. Ultimately, the main driver of the aggressive global growth scenarios is climate change. Even the IEA, which is known for its conservative projections, has been become more bullish in its outlook because of the need to rapidly lower carbon emissions.