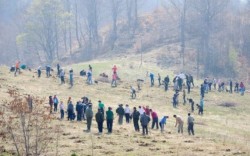 The value of forest regeneration expected to be realized in the fall of this year amounted to £ 28 million for 3,518 hectares, sums deriving from the fund for the conservation and regeneration Administration said Thursday, general manager Romsilva Adam Craciunescu.

" This fall we use over 14 million saplings for afforestation and have allocated a sum of 28 million lei. Romsilva has secured funding source for all works carried out afforestation in state forests. We also reserve this year because of good results from the sale of timber and 25 % of its capitalization went this fund regeneration, which increased by 10 million lei. The amount we use, but in 2014, "said Craciunescu.

Romsilva will actually wooded 1,711 acres this fall, and the other 1,807 hectares afforestation will be carried out through natural regeneration.

' Besides reforestation campaign in the spring, more than 11,000 acres this fall actually reforest Romsilva in May with 1711 hectares and 1,807 hectares will be achieved through regeneration. We also restore and certain works that were disaster in April 2013 due to flooding, around 600 hectares and an area of ​​additions in plantations that have not had a hundred percent success in the spring campaign, "added Romsilva head.

This fall will be used for afforestation species such as poplar, willow, locust and oak, especially in southern areas. The works will be carried out in the counties of Tulcea – 452 hectares, Dolj – 263 hectares, Ialomita – 188 acres River – 166 acres, Calarasi – 130 hectares, Braila – 128 hectares, Constanta – 103 hectares.

Afforestation work started later due to too high temperatures recorded in this period to carry out these works.

RNP – Romsilva 2010 works under the Ministry of Environment and Forests and manages 3,266,494 hectares of forest owned by the state, with about 18,000 employees, providing forestry services for an area of ​​1,123,378 hectares of publicly owned forest fund administrative units private or private owners.

Of the total area managed 586.214 hectares are found in protected areas and include including last virgin forests in Europe.