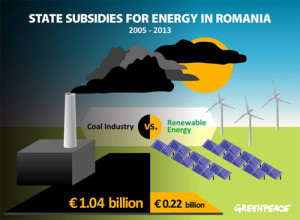 In total, in 1990, the coal industry has received subsidies worth 153 billion lei, equivalent to 2.3% of GDP in 2013. Authors point out that this number does not include external costs such as increased costs for system national health, as a result of diseases caused by air pollution.

Romania has a long tradition in the mining industry and has significant reserves of coal, which can ensure the continuity of production for 150 years. Coal reserves are estimated at 2.446 mn tons, of which 252.5 mn tonnes are commercially exploitable area currently leased.

According to the study, in the early 1990s, Romania had 464 pounds of coal and other minerals. By 2004, production ceased in 344 me because they were not profitable; 82 were closed and were still contracted to the closure of 191 of me. The main reasons for the closure were low value coal and high production costs caused by extraction outdated technology, lack of investment in improved efficiency, higher costs in accordance with environmental standards and domestic demand for coal. 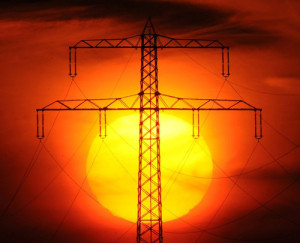 In contrast, renewable energy sector is a small but rapidly growing sector contributed a total energy of about 7 % at the end of 2013. Increase the installed production capacity is driven by the development of wind energy the study shows.

In 2012, renewable energy has reached 26.40 GWh, an increase of approximately 65 % over the previous year as a result of new wind capacity installed. According Transelectrica by the end of 2013, installed capacity reached 2.522.39 MW in wind farms, solar parks and 30 466.81 MW in biomass.

Romania's potential in terms of wind energy is considered the largest in Southeastern Europe, claims the survey. Moldova and Dobrogea are considered most suitable areas for the development of wind farms. Southeast Dobrogea was ranked second in Europe. The wind potential of Romania is estimated at 14,000 MW installed capacity, equivalent to total annual 23 TWh.

The scheme helped support clean energy development until it was changed.

Like other countries in Europe such as Italy, the Netherlands, Belgium and Sweden, Romania has decided to adopt a market-oriented mechanism in order to compensate producers of clean energy investment costs further.

Support scheme in Romania, seen in 2012 more than generous by European leaders was, however, modified from Jan. 1, to the detriment of investors in clean energy.