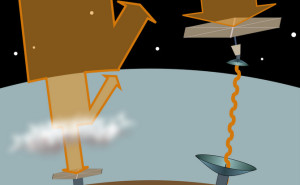 Collecting solar power from outer space for delivery and distribution down to Earth is a topic that was already previously discussed many times. This time however, more than just speculation and idea gathering, an actual proposal is now being presented that might just catapult the idea into an actual project.

India and the U.S. National Space Society have just recently presented their own version of a space solar power initiative. Basically, the plan is to introduce their idea to government leaders around the world, hopefully prompting a positive response, followed most likely with the initiation of a project that would lead to the actual construction of the space solar array.

Discussions of the concept have already started as early as a few years, ago, last 2010. A study to determine its feasibility was started by the Indian Defense Ministry’s “Defense Studies and Analyses” group, conducted by US Air Force lieutenant colonel Peter Garretson. The verdict of the study seemed to have prompted a go-signal for the proposal, because according to the report, Gerretson wants both Indian and American governments to work together so that space-based solar power can be available as early as 2025.

Aside from the perceived feasibility of the project, one vital positive driving force in the culmination of the proposal was the removal of technology sharing restrictions by the U.S. administration, allowing Indian agencies to be part of the entire proposal’s think tank.

The report shortly explained Gerretson’s three-step plan for the space solar project. The first part of the plan describes the development of the needed technologies, the building of a work force, and the completion of a prototype that would demonstrate the array’s capabilities. The second part requires the formation of an international consortium, with the objective of constructing a slightly lower-scale space solar power system that can be modified and enhanced later on. The final stage of the plan brings economics to the stage, where India and the United States would set up a for-profit consortium that would “address energy security and carbon mitigation concerns”.

If other G8/G20 nations decide to approve and support this very ambitious project, it is predicted that it would significantly impact economics and all industries in general, as it would provide jobs for countless people around the world, vastly improve the energy sector, and significantly reduce gas emissions in the long run.

For those who want to have an idea just how efficient space-based solar energy systems could be, you could check out our previous article that briefly discusses its main points. As for the need of the US and India to lead the project, the report says that both countries have a good solar project track record and a solid space program history.