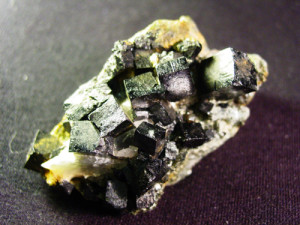 
Solar cells were once a custom product reserved for satellites and military use. In 1977, a solar watt cost $ 77. The cost is now about 80 cents, and solar energy begins to compete with conventionally generated electricity more expensive.

If the price will fall further, solar energy could develop into an overwhelming, hope Henry Snaith and colleagues at Oxford University.

As he recently described in the journal Science, quoted in The Economist, Dr. Snaith planning to replace silicon, the material used in most solar cells with a substance called perovskite.

This, he believes, could greatly reduce the cost of a watt of solar energy.

The holes and electrons then move in opposite directions, and the result is power. The higher the electron and hole, the flow will be faster, thus generating more electricity.

Electrons, however, often the holes are trapped while still within the cell and therefore can not contribute to the current .

Silicon used in commercial solar cell has a diffusion length of ten nanometers, a not high enough. Partly for this reason, the efficiency of a silicon cells for the conversion of incident light into electricity, is less than 10 %.

Perovskite Dr. Snaith is more effective. It has a diffusion length of 1,000 nanometers, giving a yield of 15 %.

Perovskite compound is a substance known as cubo – octahedral crystal, in other words, cube corners cut off. They are, therefore, six and eight triangular faces orthogonal.

The substance itself is a naturally occurring mineral, but a lot of other elementary combination takes the same form. Dr. Snaith’s Perovskite is a particularly complex.

It has an organic part, made ​​of carbon, hydrogen and nitrogen as well as some inorganic lead, iodine and chlorine. The organic act as a dye, absorbing more sunlight. The inorganic help conduct electrons.

In addition, it is cheap to manufacture. Purification of silicon requires high temperatures (and therefore expensive ). Dr Snaith perovskite can be mixed at room temperature.

However, perovskite is a recent invention, and its durability has not been tested properly. Many such promising materials fail to survive constant exposure to the sun, an imperative condition to form a solar cell.

It remains to be seen, as related tests if the substance will revolutionize the solar cell industry.