“We are living it, and it is gaining force.”

It would be hard for most Americans to look around and conclude that we are in the middle of an historic shift in our energy sector. Gas-powered cars still dominate the roads, most of us don’t own a solar PV system, and more than 70 percent of homes still rely on 100-year-old incandescent light bulbs.

But within the energy industry, there are major improvements in the economics of renewables, electric vehicles and lighting that are accelerating an increasingly rapid shift in certain sectors.

A new report from the Department of Energy report lays out some of these advances in wind, solar PV, LED lighting and electric vehicles throughout the U.S. They’re worth a look.

Since 1999, the average wind turbine has increased electrical output by 260 percent. So although turbine prices have risen in recent years, the cost of electricity from wind has fallen to around 5 cents per kilowatt-hour — a 90 percent drop since the 1980s. In 2012, wind was the single largest source of new electricity capacity in the U.S., beating even natural gas. 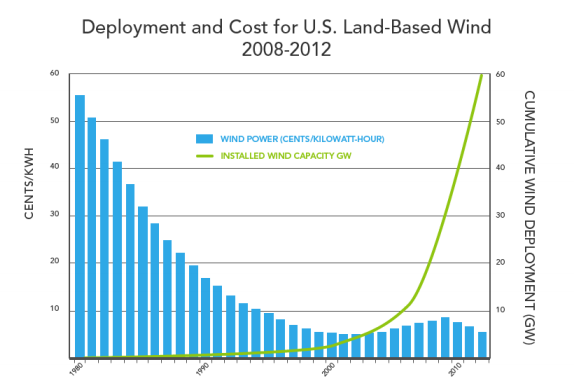 As we recently pointed out, there is now a solar PV system installed in America every four minutes, up from every 80 minutes in 2006. According to GTM Research’s Solar Market Insight report, the national average price of an installed PV system declined by 26.6 percent in 2012. That drop has been helped by a strong reduction in module costs and pricing due to global oversupply. The DOE points out that the cost of a solar module in 2012 is 1 percent of what it cost 35 years ago.

Consequently, two-thirds of all distributed solar PV capacity in the U.S. has been deployed in the last 2 1/2 years, GTM Research Senior Analyst MJ Shiao recently showed. 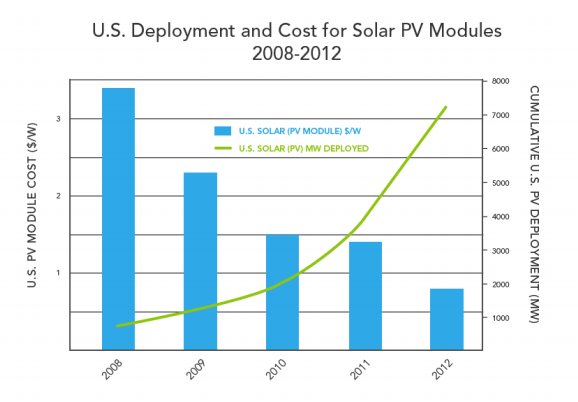 As lighting manufacturers ramp up production, the cost of producing an LED relative to the cost of raw materials has declined by 25 percent each year. This leads some experts to conclude that LEDs may represent 80 percent of all new lighting by 2020. According to the DOE, there were 400,000 LED lights deployed in the U.S. in 2009. With 20 million deployed today, that number has increased by a factor of 50. According to a recent survey from Sylvania, 35 percent of U.S. households now have at least one LED light. 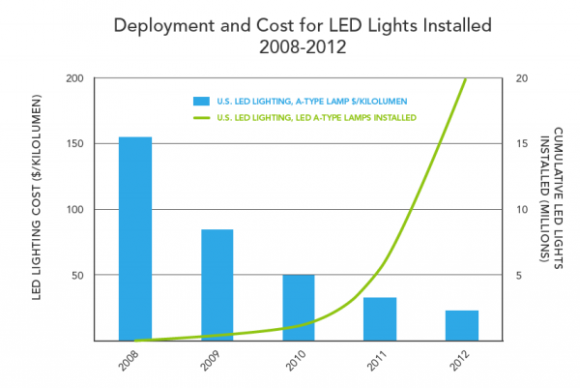 After multiple fits and starts, the electric vehicle market in the U.S. is finally starting to make some progress. In the first half of this year, sales of electric vehicles have already been more than double the total of all sales throughout the entirety of 2012. In California, Tesla is outselling high-end cars like Porsches, Lincolns, Land Rovers and Jaguars. And although battery makers have struggled to find customers and appropriate business models, the DOE reports that the cost of manufacturing an EV battery has dropped by 50 percent since 2008. 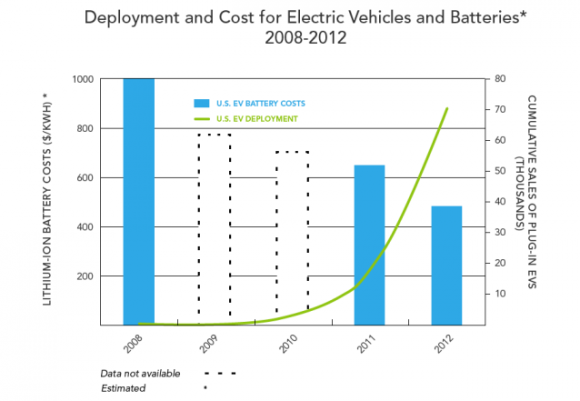 Framing these trends as proof that the “clean energy economy” is now upon us would be a stretch. If anything, it shows how much experience an industry needs to bring down costs. But these are signs that some pretty big changes are underway in the energy industry — and Americans are increasingly going to see these changes not just in colorful charts, but in their neighborhoods.

“The trends in each sector show that the historic shift to a cleaner, more domestic and more secure energy future is not some far away goal. We are living it, and it is gaining force,” conclude the authors of the DOE report.