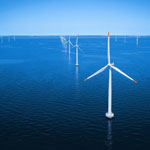 Offshore wind farms can create a host of benefits for the local marine environment, as well as combatting climate change, a new study by the Marine Institute at Plymouth University has found.

The Marine Institute found that wind farms provide shelter to fish species since sea bottom trawling is often forbidden inside a wind farm, and it found that turbine support structures can create artificial reefs for some species.

One high-profile issue covered by the Marine Institute study was that of organisms colliding with offshore wind turbines. The study, backed-up by a number of previous studies, found that many bird species fly low over the water, avoiding collision with wind turbine blades. It also found that some species, such as Eider ducks, do modify their courses slightly to avoid offshore turbines.

When it comes to noise, the study found “no significant impact on behaviour or populations.” It noted that a separate study in the Netherlands found more porpoise clicks inside a Dutch wind farm than outside it “perhaps exploiting the higher fish densities found”.

The study also said that offshore wind power and other marine renewable energies should be rolled out rapidly in order to combat the threats to marine biodiversity, food production and economies posed by climate change.

“It is necessary to rapidly deploy large quantities of marine renewable energy to reduce the carbon emissions from fossil fuel burning which are leading to ocean acidification, global warming and climatic changes,” the study published said.

“It is clear that the marine environment is already being damaged by the increasingly apparent impacts of climate change; however it is not too late to make a difference to avoid more extreme impacts,” the study said.

“If you bring all these studies together they all point to a similar conclusion: offshore wind farms have a positive impact on the marine environment in several ways,” said Angeliki Koulouri, Research Officer at EWEA. “First they contribute to a reduction in CO2 emissions, the major threat to biodiversity, second, they provide regeneration areas for fish and benthic populations,” she added.

Koulouri and the studies noted in this blog suggest that further research is needed, in particular because impacts are season and site specific, and they note one proviso: offshore wind farms must be carefully planned and sited in order not to dramatically disturb sensitive marine environments.

“Developers and regulators should work closely with marine ecologists and conservation groups at an early stage to identify suitable locations for marine renewables,” the Marine Institute study recommended.