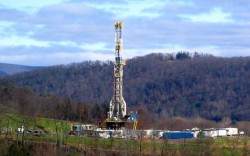 Businessmen have encouraged the use of hydraulic fracturing, a technology that involves injecting water and chemicals into the ground to extract shale gas to lessen energy dependence on Russia Germany. This provides a third of German imports of natural gas.

Last week, Chancellor Angela Merkel's government began preparing a law to limit the use of hydraulic fracturing only in rare cases, unlike the U.S., where it is often used extraction method.

The low would allow the use of fracturing unless toxic chemicals are used when there is certainty that they will not pollute the groundwater.

These restrictions represent an obstacle for CEOs of large companies, which lawmakers say too easily subject population fears that new technologies will affect the environment.

They believe that risk aversion limits the competitiveness of a nation that discovered nuclear fission used to detonate nuclear bombs in 2005 and is led by a physicist by training, Chancellor Merkel.

"If we make a habit of refusing the risk we take this company to the grave," said Karl Ludwig Kley, CEO of Merck KGaA, the oldest pharmaceutical and chemical company in the world.