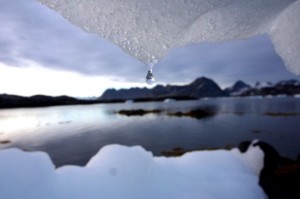 The rapidly melting Arctic is not only a looming climate catastrophe, but new research shows it could be an economic disaster, as well.

In findings published in the journal Nature, economists and polar scientists from the University of Cambridge and Erasmus University Rotterdam found that the ripple effects of climate change in the Arctic — unlocking frozen reserves of methane that speed global warming and cause destructive and costly climactic changes across the planet — could deal a severe blow to the global economy.

The release of methane from thawing permafrost beneath the East Siberian Sea, off northern Russia, alone comes with an average global price tag of $60 trillion in the absence of mitigating action — a figure comparable to the size of the world economy in 2012 (about $70 trillion). The total cost of Arctic change will be much higher.

While much has been made of the coming economic boom that will result from an increasingly ice-free Arctic — shipping lanes, fisheries, and fossil fuel reserves that previously were inaccessible — little research has been done on the potential economic damage these unprecedented changes may incur.

“People are calculating possible economic benefits in the billions of dollars and we’re talking about possible costs and damage and extra impacts in the order of tens of trillions of dollars,” said Chris Hope, professor at Cambridge’s Judge Business School and report author, in an interview with Financial Times.

The Arctic is melting at an alarming rate — about twice as fast as the rest of the globe — and the impacts thus far have been devastating. The National Oceanic and Atmospheric Administration’s 2012 Arctic Report Card documented a very grim year for the region and found “strong evidence of widespread, sustained change driving Arctic environmental system into new state,” including record-low sea ice extent, record ice sheet surface melting in Greenland, record-high permafrost temperature, and record-low snow extent.

The researchers from Cambridge and Erasmus explain that as the sea ice melts at an unprecedented rate, the thawing permafrost releases large stores of methane. Methane is an extremely potent greenhouse gas and, as is the case with the Arctic’s multiple positive feedback loops, increased concentrations of methane in the atmosphere will accelerate global warming — continuing the destructive cycle.

What do all of these unprecedented changes mean? Many experts now say that if recent trends continue and Arctic sea ice continues its ‘death spiral,’ we will see a “near ice-free Arctic in summer” within a decade. That may well usher in a permanent change toward extreme, prolonged weather events “such as drought, flooding, cold spells and heat waves.”

These extreme events come with a huge price tag. If nothing is done to mitigate the effects of climate change, the researchers estimate that just one giant ‘methane pulse’ will lead to an extra $60 trillion of mean climate change impacts, or 15 percent of the total predicted cost of climate change impacts (about $400 trillion). While this number alone is extraordinary, they emphasize “The full impacts of a warming Arctic, including, for example, ocean acidification and altered ocean and atmospheric circulation, will be much greater than our cost estimate for methane release alone.”

As former NOAA Administrator Dr. Jane Lubchenco bluntly stated, “What happens in the Arctic doesn’t stay in the Arctic.” The region plays a major role in regulating Earth’s systems, such as climate and oceans, and it’s becoming increasingly clear to scientists that climate change in the Arctic will have profound effects on the entire planet. What needs greater attention, researchers say, is the economic toll this will take. Gail Whiteman, another of the report’s authors, told the Guardian, “Neither the World Economic Forum nor the International Monetary Fund currently recognise the economic danger of Arctic change. [They must] pay much more attention to this invisible time-bomb.”