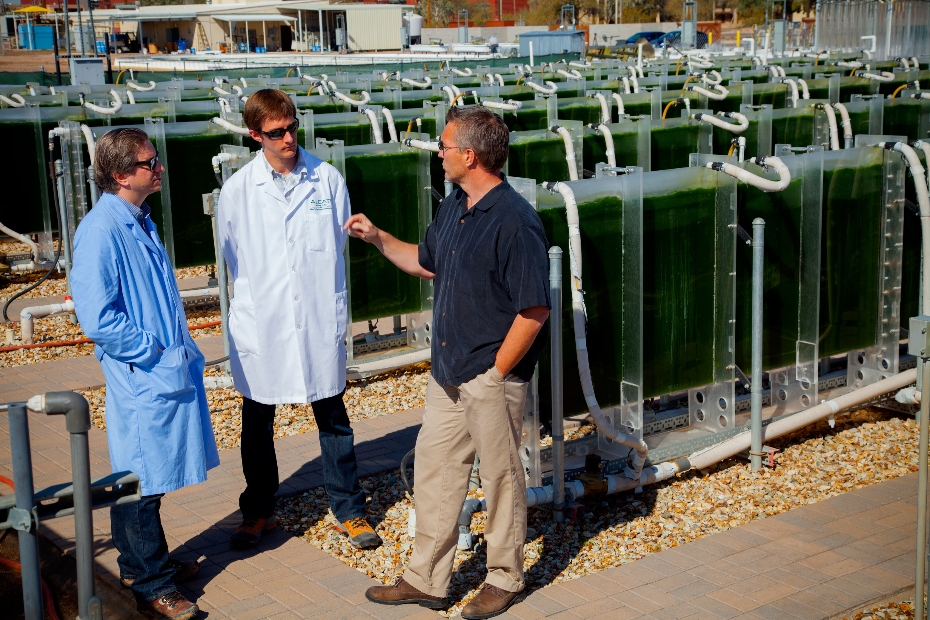 Sandia National Laboratories’ Tom Reichardt, left, and Aaron Collins, center, chat with John McGowen of the Arizona Center for Algae Technology and Innovation (AzCATI). Sandia has developed several complementary technologies to help the algae industry in detecting and recovering from pond crashes, and is making use of the AzCATI test-bed facility to collect data and apply its technologies.

Because of the way algae is grown and produced in most algal ponds, they are prone to attack by fungi, rotifers, viruses or other predators. Consequently, algal pond collapse is a critical issue that companies must solve to produce algal biofuels cost-effectively. The issue was identified as a key component in the Department of Energy’s National Algal Biofuels Technology Roadmap.

Sandia National Laboratories’ Tom Reichardt, left, and Aaron Collins, center, chat with John McGowen of the Arizona Center for Algae Technology and Innovation (AzCATI). Sandia has developed several complementary technologies to help the algae industry in detecting and recovering from pond crashes, and is making use of the AzCATI test-bed facility to collect data and apply its technologies. 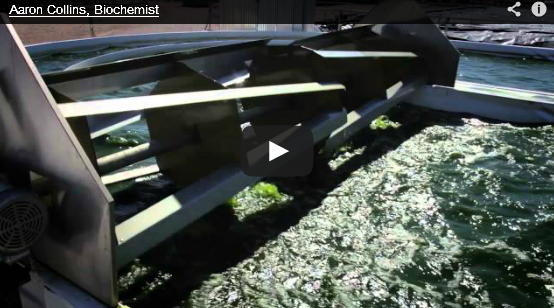 Quick Identification of Organisms in Ponds Is Key to Mitigation

RapTOR, originally developed for homeland security purposes, was developed to solve the “unknown unknowns” problem – lethal agents that could be weaponized from ordinary viruses or disguised to look harmless. It was designed to serve as a tool to rapidly characterize a biological organism with no pre-existing knowledge.

Lane’s team also created a method for creating a field-ready assay for those agents, something that works quickly and is relatively inexpensive. They are applying SpinDx, a device developed by other Sandia/California researchers that can (among other features) analyze important protein markers and process up to 64 assays from a single sample, all in a matter of minutes.

Finally, a Sandia team led by researcher Jeri Timlin, in collaboration with the University of Nebraska’s Van Etten lab, enhanced the RapTOR diagnostics by studying interactions of a certain virus with algal cells. Using hyperspectral imaging, they identified spectroscopic signatures of viral infections arising from changes in algal pigmentation. These signatures potentially could be exploited for early detection and subsequent mitigation of viral infections in algal ponds.

Advanced Tools, Instruments Could Be Part of “Arsenal” for Pond Operators

“It’s important for the growth of an algal industry to develop a method where algal pond operators can learn immediately when there’s a problem with their ponds from a biological agent standpoint,” said Lane. “It’s equally important that they learn – within a very short period of time, like 24 hours – what specific agent is eating away at their algae, and have a technology available that could develop an assay to combat the agent. Our tools come very close to accomplishing all of those things.

“We couldn’t really do an exhaustive characterization of all of the kinds of agents that could be at the root of pond crashes,” Lane explained. “But we confirmed some that had been identified before, and we found some others that weren’t familiar to the research community. The important achievement was to develop the methodology, which hadn’t existed before.”

In practical terms, the process developed by Sandia involves a central facility where pond operators would send samples of agents that have appeared in their ponds, and assays that could be deployed back to the pond site. That’s where SpinDx comes in.

Pond site operators, Lane said, know their environments best and, especially with instruments like those developed by Reichardt, understand the signs that could indicate “sick” ponds. He envisions pond operators using a SpinDx-like device as part of their regular arsenal of equipment so they could run early detection tests whenever they sensed instability in their ponds. They could then provide samples to an off-site facility, which in turn would send back assays to allow the operator to investigate the problem more thoroughly and ward off pond crashes before they occur.

“That’s the beauty of SpinDx,” said Lane. “The disks are inexpensive, require little technical expertise and can be manipulated by non-scientists.”

Now that the core principles of pathogen detection and characterization technologies for pond crash forensics have been successfully proven, the next step will be to conduct more robust demonstrations. Serendipitously,  Lane’s and Reichardt’s groups will be continuing their work as part of the Algae Testbed Public-Private Partnership (ATP3) led by Arizona State University (ASU), the first national algae testbed. The Sandia team will apply the technologies, collect more data and seek additional collaborations

“Our results over these past couple of years have been compelling, but now we need to deploy the technology into real-world ponds,” Lane explains. The original work, he says, has moved from the laboratory environment into the operational realm, with only modest research and development now necessary.

Sandia will make use of an algal test bed facility at ASU known as the Arizona Center for Algae Technology and Innovation (AzCATI). The facility features algal ponds and closed photobioreactor algae cultivation systems of various sizes and serves as a hub for research, testing and commercialization of algae-based products