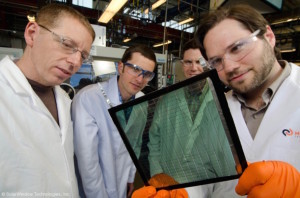 We’ve seen several transparent solar cell concepts on Inhabitat, but perhaps none with such ambitious claims as those made by SolarWindow Technologies.

In a webinar today, the Maryland-based startup announced that their revolutionary power generating windows, which they say can generate 50 times more power than conventional solar panels per building, would soon hit the market.

Unlike traditional and opaque PV technology, SolarWindow can be readily applied as a coating to any glass window or plastic surface and instantly generate electricity, even in artificial light and shade.

The company claims that the SolarWindow technology can produce more power at a lower cost and offers an incredibly fast ROI of just one year.  That’s incredible, considering that conventional solar systems require at least 5 to 11 years for payback. 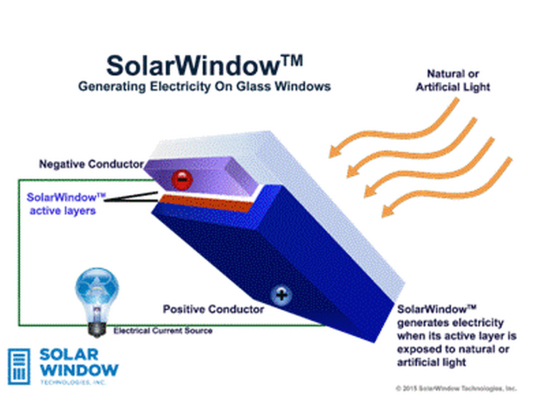 The concept of transparent solar cells that would transform glass-clad skyscrapers into solar farms and turn smartphone screens into solar panels is exciting, but nothing new. Last year, Michigan State University scientists unveiled a fully transparent solar concentrator that allows visible light through and uses organic molecules to guide ultraviolet and infrared wavelengths to the edges of the glass, where tiny photovoltaic cells turned the non-visible light into electricity.

SolarWindows Technologies is a different story. Today’s webinar mentioned that the coatings would be primarily organic—made mainly from carbon, hydrogen, nitrogen, and oxygen—but was vague on the scientific details.

However, if SolarWindows are expected to produce 50 times the energy of traditional PV cells we can probably assume they’ll be converting visible light into electricity as well.

There are a number of different layers in the coating, but the most important ones the company touched on are the Active layer, where electricity is generated by absorption of light, and the Transparent conductors, which allow the electricity to be extracted. The liquid coatings would be applied at ambient pressures and dried at low temperatures to produce transparent films. 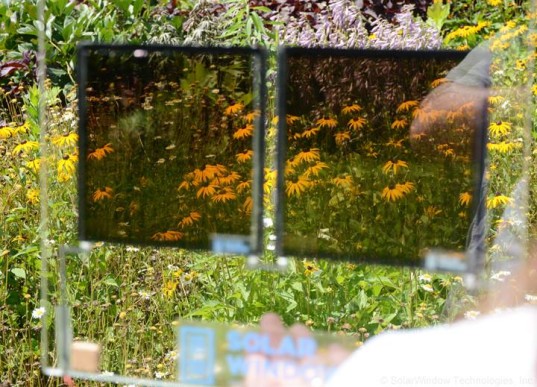 The SolarWindows coatings would be applied to the inside of a glass-insulated window unit, not on the outside in order to protect the solar cells from the elements.

To cut down costs, the coatings are developed for seamless integration into existing glass manufacturing processes. To generate 50 times the power of conventional photovoltaics, the SolarWindows would be applied all sides of the building rather than just the roof. “Invisible wires” in the glass convert photons into electricity and help provide a visual reference to prevent birds from crashing into the glass.

The company also believes the technology can achieve a commercially viable 25-year warranty, which is the same lifespan shared by conventional solar panels.

While the numbers may seem too good to be true—SolarWindow Technologies also says that a “single installation can avoid 2.2 million miles of carbon dioxide vehicle pollution; 12 times more than [conventional] solar”—the company is planning to deliver on their promises soon.

SolarWindow Technologies announced that they would commercialize their innovative and cost-effective technology within the next 28 months.