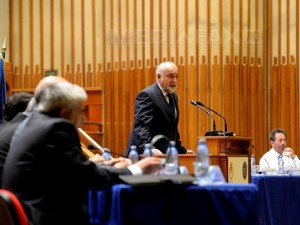 Economy Minister, Vrujan Vosganian, said that he is a supporter of continuing the program of nuclear energy production in Romania and the fact that the investment in Units 3 and 4 at Cernavoda was not pursued is not a failure, "but only a stalemate".

"I am a supporter of the nuclear program in Romania. (…) I don’t want to recall now why the investment in reactors 3 and 4 was not continued. I don’t think it’s a failure what happened to the partnership for reactors 3 and 4, but a deadlock from which I hope we get out", Vosganian said Wednesday at a NucInfo 'Day symposium, organized by the Nuclear Agency for Radioactive Waste, with the support of MEDIAFAX and gandul.info.

The Minister argued that although the price of electricity is down on OPCOM, nuclear investments are justified because nuclear energy is likely to "counteract the depletion of other resources".

"Signals of the last period show that Romanian economy has not increased energy consumption; even on OPCOM electricity price has seen some decline, which if continued could pose uncertainity. Nuclear energy provides us energy independence, is clean, relatively cheap, we have the necessary human resource and technology. It can counteract depletion of other resources, such as natural gas, commodities whose compensation from the Black Sea is uncertain", said Vosganian.

The minister said that reactors 1 and 2 at Cenavodă plant are in the first places in terms of nuclear safety and smooth operation of the units.

"The presence of representatives of the Romanian Government is a positive sign that the Government gives a concrete support to the Romanian industry, to the growth of international cooperation and to increase the public acceptance. (…) What we want from this event is to achieve a dialogue, a very concrete exchange of experience and very practical. In fact, this is the sense in which we operate our work. We don’t want just to mark an event that we’ve realized successfully. That’s not our goal. Our goal is to create a possibility of constructive dialogue to resolve some real problems", said Florin Constantin Tatar, President of the Nuclear Agency and Radioactive Waste (NARD).

At the event was discussed the involvement of stakeholders from this sector, international cooperation and public acceptance. Also, there were analyzed the requirements for sustainable nuclear investments and solutions and strategies for their implementation.

Among the topics approached were the DFDSMA project (a feasible way to isolate for good radioactive meager and average waste activity) and the accomplishment of investments for this program, the planning of future energetic and non-energetic nuclear power plants, nuclear energy development scenarios, expanding international cooperation (the program of cooperation with AIEA, Romania's participation in the INPRO program, the ratification of the Cooperation Agreement between Romania and the Hashemite Kingdom of Jordan and Romania's cooperation with France in the field of radioactive waste management) and strengthening the legal duties of ANDR.

Nuc Info Day 2013 focused on specific aspects relating both to fruition Romanian experience gained in several decades to develop its own nuclear program and on the solving of some problems of Romanian industry through mutually beneficial international cooperation.

Nuc Info 'Day is a traditional event of the nuclear domain in Romania, mainly dedicated to disseminate the information about the benefits and challenges of implementing nuclear power applications serving the general public and on the main scientific and technical progress in the peaceful uses of nuclear energy . Simultaneously, the symposium is a good opportunity for many official representatives who stand for the political environment, central government, research institutes, potential investors, industrial operators, NGOs from the field, mass-media and any other interested persons, to participate constructively in discussions on issues of mutual interest.

The Nuc Info 'Day Symposium has enjoyed popularity since the first editions, both for nuclear specialists and those interested in this field – the media, academics, students, representatives of the Romanian politics and local authorities – this event being a real opportunity to exchange information and experience. In the latest editions, the event experienced amplitude both in terms of the number and diversity of participants and in terms of the complexity of addressed issues.

The Government also has the possibility of opening a nuclear assessment in the central regions of the country, where seismic  risk is low, said Vosganian.

The Government signed in 2008 a partnership with several companies for the development of the investment in nuclear power plant reactors 3 and 4 at Cernavoda, estimated at that time to four billion euros. In 2006, this investment was estimated to reach two billion euros.

Simultaneously, in 2010, CEZ (Czech Republic), Iberdrola (Spain), GDF SUEZ (France) and RWE (Germany) companies withdrew from the project. Since then, the government claims that it is seeking new partners, having discussions with several companies, including South Korean and Chinese.

Originally designed to be run by a joint venture between the state, represented by Nuclearelectrica and foreign companies, in which none of the participants has majority stakes, the project of 3 and 4 reactors is now controlled by the state, with a share of over 80%.

Vosganian says that the government has full support for nuclear energy and that he hasn’t abandoned yet the idea of building another nuclear plant in the center of the country, even if national energy consumption is decreasing, which raises the question of suitability of investments in new capacities for the production of electricity.

On the other hand, the government has not found new investors to continue investing in Cernavoda.

"We don’t have certain perspectives, we seek investors, we are working with the Ministry of Large Projects and the Ministry of Energy. We kept in the evaluation the opening of a nuclear power plant in the center of the country, where seismic risk is low", said Vosganian.

At this moment, in the company which is trying to build the reactors 3 and 4, named EnergoNuclear, are three more companies – Nuclearelectrica, ArcelorMittal Galati and Enel (Italy).

According to Vosganian, nuclear power could provide the energy independence of Romania, is "clean and relatively cheap" and Romania has both "necessary human resource" and "advanced technology". Also, nuclear power could counteract the depletion of domestic gas, given the fact that the prospect of extracting gas fields from the Black Sea "is not yet effective".

Vosganian argues that although the power consumption and price dropped, he is confident that the economy will have a development that will require increased consumption.

"These decreases (of consumption and energy prices) could be jeopardizing the opportunity of continuing the nuclear program. The economy will continue to require increased electricity consumption. (…) The government has full support for the use of nuclear energy for peaceful purposes and we are making room for these investments among the major investments that we will make in the future", said the Minister of Economy.