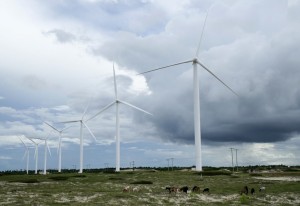 When President Barack Obama announced the country’s first national climate strategy, many people wondered what it would mean across the nation. Yet, the strategy may carry even more significant implications overseas.

The plan restricts U.S. government funding for most international coal projects. This policy could significantly affect energy producers and public and private investors around the globe.

Why is this important?

Global energy-related greenhouse gas emissions, a major driver of climate change, hit a record high in 2012. Meanwhile, there are more than 1.2 billion people worldwide still without access to electricity. The global middle class is booming — especially in the developing world — and with it, energy demand is surging. In fact, global energy demand is expected to grow by one-third by 2035.

This surge in demand, however, does not need to lead to a surge in carbon pollution. It is well past time for the world to embrace the shift to renewable energy — a shift that would bring economic opportunities while leaving a better planet for future generations.

In fact, this transition is already underway. Renewable energy (including hydro) is the fastest-growing power generation sector in the world, according to a recent International Energy Agency report. Renewable energy is on pace to comprise one-quarter of the electricity mix by 2018. It is also increasingly cost-competitive with fossil fuels.

Many developing nations, like South Africa, China and Brazil, are setting the pace. Renewable energy investments in developing countries hit $112 billion in 2012, according to Bloomberg New Energy Finance, close to the $132 billion from developed countries.

Obama’s announcement should have a significant ripple effect, especially on major U.S. lending institutions. The U.S. Overseas Private Investment Corporation (OPIC), which works with the private sector to invest abroad in support of development activities, committed around $1 billion to renewable energy projects in each of the past two years, with its annual commitments increasing nearly 10-fold since 2009. Its recent renewable energy investments are focused on Peru, South Africa and Pakistan, among others.

Obama’s announcement will help the bank balance its portfolio away from fossil fuel projects and toward the renewable energy projects that will help create U.S. jobs by selling clean energy technologies abroad.

Momentum is clearly growing as the World Bank just announced that it will restrict funding of new coal-fired power plants to rare circumstances and support universal access to reliable modern energy. Even before its decision, the bank was taking steps in this direction — $3.6 billion of its $8.2 billion in energy investments between June 2011 and June 2012 went to renewable energy projects. The bank has some important test cases, including in Kosovo, in the near future.

Clearly, renewable energy can be profitable for business. Many companies, like Wal-Mart, Google and General Electric, have made major bets on renewables. Notably Warren Buffett’s Berkshire Hathaway firm has been increasing its clean energy investments, with a recent purchase of $5.6 billion for a renewable energy company in Nevada and a $2.4 billion investment in a wind farm in California.

As clean energy markets expand, these American companies and investors will be well-positioned to lead.

The reality is that emerging economies do not need to go down a path of relying on fossil fuels. Just as many developing countries skipped land lines and went straight to cellular telephones, these countries can leapfrog right to affordable clean energy.

Investing in clean energy is not only good for the economic growth, it is good for people. The unfortunate reality is that those in the poorest countries are often the most vulnerable to climate change — whether from rising seas that threaten homes and water supplies or droughts that drive up food prices. This is the human cost of fossil fuels that often goes unmentioned in balance sheets and gross domestic product statistics.

Considering the risks of climate change and benefits of clean energy, the president’s climate plan clearly deserves our support. Now, it is our collective responsibility to turn this plan into a reality.