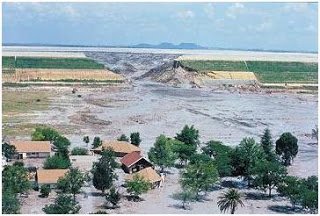 As promised , today we publish a list ( incomplete ) of leakages occurring cyanide in gold mines in the world in the last decade .

As you will see , though mining companies are from countries with high level of civilization (USA, Canada , Sweden , etc. . ), They exploit in more backward terms of economic and technical countries, so- called " banana country '( Ghana , Tanzania, Philippines and so on ) .

From this point of view, Romania is a bananian country as possible , right?

Here are some of the spillage of cyanide, which have been followed by the environmental destruction of wildlife on large surfaces ( including the abundance of water ) and often casualties .

The life of a man in a banana country has any value ?

According to the 2012 annual report , company mining ( gold mines and Polimet ) Boliden in Sweden only had 9 accidents average in 2012.

31 October 2011 and 29 December from the same year – the British mining company Hambledon Mining Kazakhstan occurring cyanide leak at one of the tailings pond dams .

8 October 2009, Newmont Mining Corporation of Denver, two of the largest corporations in the world gold mines, cyanide negligently discharging his gold mine Ahafo Gold Mine in Ghana.

In May 2009, in Tanzania, the Barrick Gold mine, mine toxic sludge seeps into the river: 20 dead .

January 30, 2004 , Australia : a government report confirms that the Kalgoorlie Gold Mine cyanide leaked into groundwater .

August 7, 2004 , Papua New Guinea : it goes Misima mine cyanide during decommissioning of the mine.

January 2003 , Western Honduras: massive leak of cyanide at the mine San Andrés .

November 2001 , China – 11 tons of liquid sodium cyanide leaking into a tributary of the Luohe in Henan Province .

October 2001 , Ghana – drain thousand cubic meters of tailings with cyanide and heavy metals from a dam during a mining operation in the Wassa West District .