The real situation of European states on the progress made in achieving the EU's goals. Photo via trueactivist.com

When it comes to renewable energy, for the most part of the world, Europe appears to be the best example of responsible policies. Unlike the United States, focused mainly on fossil fuels, Europe has made progress in developing alternative energy sources. This is due to its geographical position, but also the high level of environmental benefit, experts say.

While China and India continue to suffer from pollution, Europe is becoming increasingly green continent of the world, a territory that seems to take seriously the environmental policies such as emissions trading system. At least this is the general perception, says Oil Price.

The latest infographic from the EU, detailing the progress of European countries towards their modest renewable energy targets for 2020, just illustrates this difficulty.

Europe has set a target known as the 20-20-20 by pursuing three key objectives for Member States in 2020:

1.First, the EU would reduce by 20 % greenhouse gas emissions emissions compared to 1990 levels;

2.Secondly, energy consumption in the EU would be composed of 20 % renewable energy by 2020;

Currently, only about half of EU countries clearly achieved the objectives (set for 2013) to generate energy from renewable sources.

Among the Member States that have failed this includes Britain, France and Spain. Moreover, it is expected that most of the major European countries not to touch, on time, the targets set for 2020. The list of countries includes Germany, UK, France, Spain, Belgium and the Netherlands, among others. 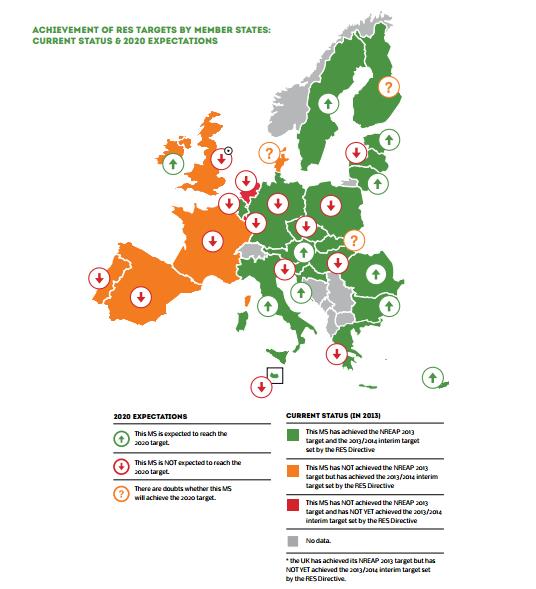 Reasons for EU Member States fail to fulfill their renewable energy commitments seem to take mainly the high cost of renewable energy in some areas and cutting bureaucracy and incentives in others.

In addition, experts say, there are two factors that significantly impeded objectives: lack of serious sanctions and the euro crisis.

When the EU has set targets for renewable energy, the organization failed to adopt a significant set of sanctions for countries that fail to make progress in the renewable energy sector.

As a result, many European countries have started with good intentions the strategy, but failed to impose tough changes that would have led to significant advances in their national targets.

Now, Europe is actually behind many regions of the world in terms of renewable energy targets. In 2014, investments in renewable energies in India rose 14 percent and the US investment grew by 8 percent.