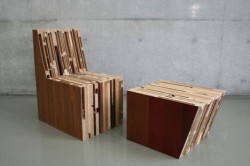 IKEA store in Baneasa Commercial Area kickstarts recycling and reuse pieces of old furniture. Thus, anyone who brings in 20 December to 26 January antique furniture, each article will receive a voucher in exchange for £ 20 (limited to 5 vouchers ) which will be used only in IKEA store in Baneasa Commercial Area. The furniture will be returned to consumers selected partner charities.

Through this initiative, IKEA company aims to contribute to everyday life better for people and the environment – offering charities the opportunity to select the best parts returned, and sending them to recycle the rest so order to eliminate any negative impact on the environment. The plastic and metal components will be recycled and recyclable components will be incinerated to generate energy in a controlled environment without adverse effects.

" We want to offer a simple solution to reuse and recycle old furniture, responsibly, with care and respect for the people and to the resources. Closing the life cycle of the furniture – by reuse by those who have the greatest need or recycling – is closely related to our business objectives. Responsibility for people and the environment is a priority for the company IKEA, "said Cornel Oprisan, Retail Manager IKEA Romania.

All those who bring old furniture from IKEA store will feature a specially designed container. Those who want to teach furniture will be able to address customer support either phone or directly in store. In exchange for each item delivered, customers will receive a voucher for £ 20, limited to 5 vouchers per person.

In addition, to meet the customers who want a natural Christmas tree, and a solution for its recycling, recycling trees enables IKEA store. The IKEA FAMILY members who will buy a Christmas tree at the point of sale in front of IKEA and they will make after the holidays along with the voucher will receive a £ 20 voucher, valid only IKEA store. Trees brought by customers between January 3 to January 31 will be collected and handed a company dealing with waste management .

IKEA is a retail furniture and decorations, Swedish origin, founded in 1943 by Ingvar Kamprad. IKEA brand was registered in 1943 in Sweden. The capital letters in the name IKEA comes from the initials of the founder's name: Ingvar Kamprad , the name of the farm where he grew up: Elmtaryd , and the name of the village where there was firm: Agunnaryd. IKEA owned company, in August 2012, over 338 stores in 40 countries or territories, of which 39 were franchise stores owned by other companies than the IKEA Group.

IKEA store in Romania was opened in the 253 th 35th country on March 21, 2007. Until March 2010 he was operated local franchise, and then became part of Romania IKEA Group.