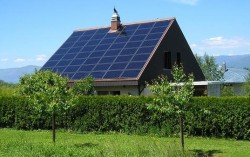 The government is preparing to help small producer of electricity from renewable sources by replacing grants with green certificates.

Thus, the central holding power up to 1 MW will receive subsidies in the form of regulated prices at which electricity will be taken to guarantee the system and will be between £ 69.4 and 167 euros per MWh, said official sources of energy, Agerpres.

Small producers will get these fixed rates, known as the " feed- in tariffs " instead of green certificates that represent subsidies for renewable energy producers with capacities greater than 1 MW. These rates are based on technology.

The document prepared by the National Regulatory Authority for Energy ( ANRE), shows that the lowest price will get the people who will use the equipment to produce landfill gas, is 69.4 euros per MWh.

In terms of energy production in cogeneration ( electricity and heat simultaneously) high efficiency biomass power producers who under 2 MW will receive a fee of 154 euros per MWh, if using energy crops or forest residues, and 134,3 euro for other biomass.

Producers of electricity in cogeneration based on landfill gas will benefit from a regulated price of 90.6 euros per MWh.

These rates should be approved, however, the European Commission, as is an aid to the sector of electric power from renewable sources.

Brussels has already been notified

ANRE sent an informal notice on this issue in December by DG Competition in Brussels, said the sources mentioned.

"The document is submitted to the European Commission in December 2013. DG Competition Council of Romania sent the expected notification law approving Government Emergency Ordinance 57/2013 and then send their ok. We hope this to happen by the end of March, " added the sources cited.

Law approving Government Emergency Ordinance 57/2013 change to renewable energy support scheme, in order to postpone a number of green certificates until the period 2017-2020.

Parliament voted in December law approving Government Emergency Ordinance 57/2013, but President Traian Basescu sent it back to Parliament on the grounds that it is not approved by the European Commission, considering that contains elements of state aid and risk Romania, thus enter the infringement procedure and pay penalties. Legislature to maintain the law, so that Basescu addressed the Constitutional Court.