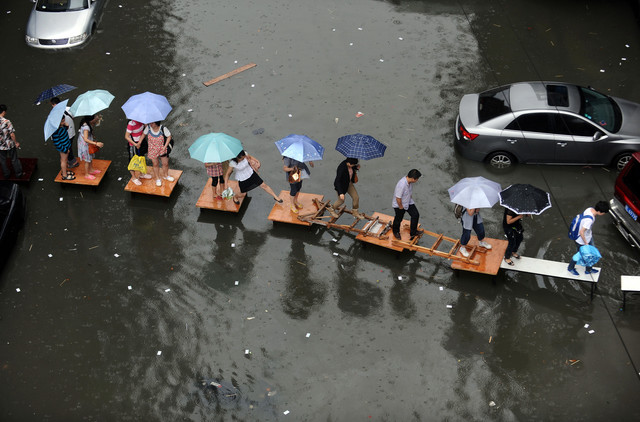 Residents cross a flooded street on a row of tables in Wuhan, central China's Hubei province, on May 29, 2012. Photograph: AFP via Getty Images.

The amount of carbon dioxide in the atmosphere surpassed a threshold not seen for 3 million years, exceeding 400 parts per million for the first time since researchers began tracking the data.

The main greenhouse gas blamed for global warming averaged 400.03 parts per million at the U.S. National Oceanic and Atmospheric Administration’s Mauna Loa monitoring station in Hawaii on May 9, the agency said yesterday.

The level is considered a landmark by scientists and environmentalists, who say carbon emissions caused by burning fossil fuels are warming the planet and must be reined in before they cause irreversible changes to weather, sea levels and Arctic ice cover. NOAA’s data stretches back to 1958.

“We are in the process of creating a prehistoric climate that humans have no evolutionary experience of,” Bob Ward, policy director at the Grantham Research Institute on Climate Change and the Environment at the London School of Economics, said in a telephone interview.

The last time CO2 levels were this high was at least 3 million years ago, he said. Then, “temperatures were 2 to 3 degrees Celsius higher than pre-industrial times, the polar ice caps were much smaller, and sea levels were about 20 meters (66 feet) higher than today.”

The atmospheric reading comes three weeks after the European Parliament rejected a plan to shore up prices in the Emissions Trading System, the world’s biggest effort to ratchet back greenhouse-gas pollution. The system attaches a cost to CO2 released by burning fossil fuels, giving manufacturers and utilities an incentive to reduce emissions.

Carbon permits traded on the EUETS fell 41 euro cents to 3.38 euros ($4.38) a ton yesterday. Analysts such as David King, former chief science adviser to the U.K. government, have said industry won’t eliminate carbon for less than 100 euros a ton. The price has fallen almost 90 percent since peaking at about 31 euros in 2006.

Carbon dioxide can stay in the atmosphere for as much as a century, so levels now may cause warming for decades. The concentration has now increased by more than 40 percent from the pre-industrial mark of 280 parts per million, which is abbreviated to ppm.

The Mauna Loa data is important because it represents the longest set of continuous measurements of atmospheric concentrations of carbon dioxide. Charles David Keeling, a geochemist at the Scripps Institution of Oceanography, began taking readings there in 1958.

Keeling’s measurements provided the first physical evidence of the steady rise in CO2 in the atmosphere as a result of burning fossil fuels, confirming part of Swedish chemist Svante August Arrhenius’s theory from 1896 that burning fossil fuels may cause global warming.

The United Nations in 2007 said stabilizing the gas at 400 ppm to 440 ppm may lead to a temperature gain of as much as 2.8 degrees Celsius (5 degrees Fahrenheit). That’s at odds with the goal set out by climate treaty negotiators from more than 190 nations, who have agreed to shoot for limiting the temperature increase to 2 degrees. The global average has already risen by about 0.8 of a degree since pre-industrial times.

“We are heading in the wrong direction in terms of dealing with climate change,” David Nussbaum, chief executive officer of the environmental group WWF’s U.K. arm, said in an e-mailed statement. “There is limited time for governments to achieve the goal they have set themselves for agreeing a global deal that effectively tackles climate change.”

Negotiators at the UN talks are working toward agreeing on a global climate treaty in 2015 that would come into force from 2020. They’ll meet in Warsaw in November to lay the groundwork for those discussions.

The surfeit of greenhouse gases in the atmosphere already threatens the 2-degree target. At best, pledges by countries from the U.S. and China to the Maldives will cut predicted emissions in 2020 to 52 gigatons (52 billion tons) from 58 gigatons, the UN Environment Program said in November. It said the level consistent with 2 degrees of warming is 44 gigatons.

The UN’s 2007 report also said that atmospheric CO2 in the range of 400 to 440 ppm could lead to sea level rise of as much as 1.7 meters. That would threaten coastal cities from New York to London and Bangkok.

The world body’s Intergovernmental Panel on Climate Change, which shared the 2007 Nobel Peace Prize with former U.S. Vice President Al Gore, will publish its latest comprehensive report on climate science in four parts between this September and October 2014.

“There is no doubt that the average global temperature will continue to increase,” Joanna Haigh, a professor of atmospheric physics at Imperial College London, said in an e-mailed statement. “Unless swift action is taken to reduce CO2 emissions, the planet will warm by more than 2 degrees.”

Skeptics of man’s influence on warming temperatures note that while CO2 levels in the atmosphere have continued to rise since the 1990s, no year has been statistically warmer on average than 1998, with higher levels for 2005 and 2010 falling within the margin of error for that year, according to data compiled by the U.K. Met Office.

“The Earth has had many-times-higher levels of CO2 in the past,” said Marc Morano, former spokesman for Republican Senator James Inhofe and executive editor of Climate Depot, a blog that posts articles skeptical of climate change. “Americans should welcome the 400 parts-per-million threshold. This means that plants are going to be happy, and this means that global-warming fearmongers are going to be proven wrong.”

That position is disputed by many researchers, said Melanie Fitzpatrick, climate scientist at the Union of Concerned Scientists.

“This needs to be a wake-up call,” she said in a statement. “Reaching 400 parts per million represents a dire experiment with the climate system. As long as humans have walked the Earth, we’ve never seen carbon dioxide levels this high.”