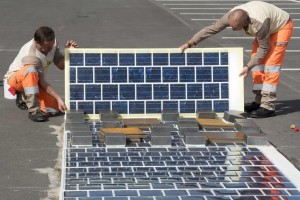 Minister of ecology and energy, Ségolène Royal, believes that if the solar road program is successful, it will generate enough power to provide 5 million people with electricity.

The solar roads plan proposes attaching thin panels of a polycrystalline silicone film called Wattway to the existing road surface. Each strip is seven millimeters thick, and the material is both waterproof and weatherproof.

Most importantly, the polycrystalline silicone surface has photovoltaic properties, yet is still durable enough to withstand heavy road traffic.

Roads powered with the solar film should last up to ten years before requiring repair or replacement, according to Colas, the construction and development company behind the Wattway technology. In paved areas where road traffic is less frequent, like parking decks or side streets, Wattway panels could last up to 20 years. 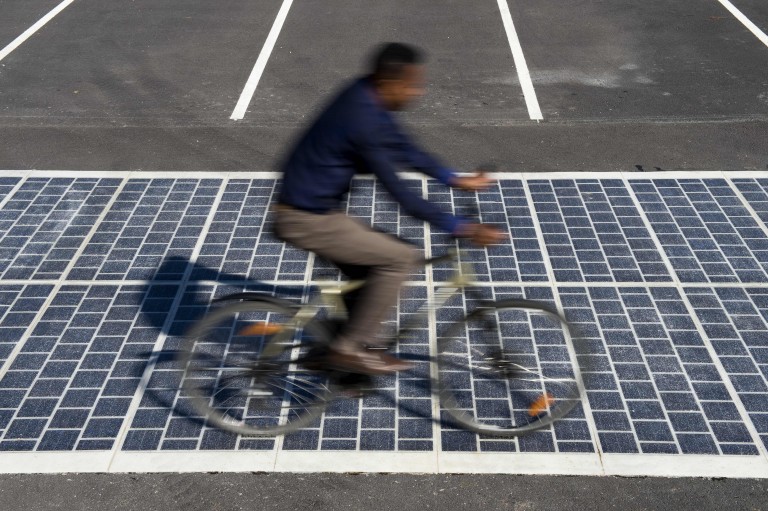 France’s Agency of Environment and Energy Management calculates that 4 meters (just over 13 feet) of photovoltaic road could power one household’s electricity needs for everything but heating, while a kilometer (about 0.6 miles) could power a village or neighborhood with 5,000 residents.

The 621 miles projected for the project would provide power for 5 million people, which is 8% of France’s total population. Although Wattway has a 15 percent yield, which is lower than the 18-19 percent industry standard, those figures show that the project would certainly makes a dent in energy usage.

Royal and the French government plan to subsidize between $220 million and $440 million of the project’s cost by raising taxes on petrol.

This specific approach to photovoltaic roads also works to keep costs down by avoiding heavy construction projects, since Wattway affixes to existing road surfaces instead of having to repave large areas. If all goes according to plan, France could have its 1,000 kilometer stretch of photovoltaic roads as early as 2021.