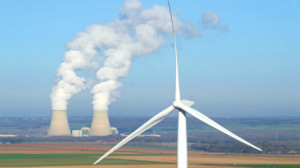 Germany relies on green energy, investing in Poland shale gas extraction and Britain announces construction of new nuclear power plants: the energy, the current does not pass between Europeans. And yet they have every incentive to adopt a common strategy.

While some are outraged and others congratulated the European Commission responded with one sentence from the British project to build new nuclear power plants: energy is an exclusive competence of the Member States. A phrase entered in the European Treaties.

States are free to draw electricity from nuclear fission or coal gas and wind and solar. As a watcher of the Treaties, the Commission has no say in the matter.

However, the news did not surprise anyone in Brussels. After all, the British were given long ago realized that they intended to return to nuclear energy to fight global warming. The debate is closed.

The truth is in the middle

Which is of course only part of the truth. Because if the British want to subsidize the construction of nuclear power plants, European Commissioner for Competition, Joaquín Almunia, should at least take a look at these projects. However, the Commission and Commissioner for Energy, Günther Oettinger, just missed an opportunity. EU must urgently to open a debate on further harmonization of energy policies in Europe.

Considering energy transitions undertaken in the UK and Germany, it's time to implement the commitments so far spoken in favor of Europeanization from the top of the lips enhanced energy policies .

Which is not to entrust the European Institutions energy sovereignty. Despite the progressive deepening of the EU energy power must remain in the capital for several reasons. Energy policy has to do with security. What better proof than the attitude of Vladimir Putin playing all the time with the gas valve ?

We can already predict that the Russian president will serve again this weapon where Ukraine will be too close to Europe in November in Vilnius, Eastern Partnerships Summit. Energy supply industry and the population is too vital to be left to foreign hands, in Brussels – as long as there is a common security policy in Europe.

Moreover, competition systems and the debate about the best bunch energy can have a positive impact. As a general rule, the Commission shall ensure that the subsidies too generous not to harm competition.

But the EU should be an example to compel the British to choose a German way – out of nuclear – which I consider to be naive, because too expensive ? And why the EU should force the Germans to opt for a British solution – the relaunch of nuclear energy – which it considers naive as risky ?

Time will tell if wind and solar will provide security of supply and the expected jobs in the "green economy " or whether the industry will finally banish the UK. Or maybe even if Poland will remove controversial election shore shale gas. Three models to be said in passing, allow a reduction in emissions of greenhouse gases.

A range of solutions.

Why reduce this range of solutions? For two reasons. The first is that European countries – including the UK – are not " energy islands ". In spite of network faults European gas and electricity now pass unchecked borders, or near, often taking circuitous routes to get from point A to point B.

The Stuttgart- Paris route , only a fifth of the electricity takes the most direct route – the rest make detours, including neighboring countries. In other words, the network is already in Europe. Vision purely national energy policy remains in default .

Individual initiatives are not without consequences, as evidenced by the example of the energy transition in Germany. Exiting the nuclear and the concurrent development of green electricity production have heavy repercussions on neighboring countries. During peak production, volumes of green electricity networks are now transferred to Dutch, Polish or Czech, German network is not able to absorb them.

Do you have the courage to adapt European climate and energy policy.

EU seeks to define new targets to reduce CO2 emissions, and to increase the share of renewables by 2030. But different types of approach by Member States could undermine this ambition.

If the installation of phase shifters can fix it, the price can only de facto disappearance of the internal energy market. Germany can not you like to make this choice, especially since you also depend on future import power during peak demand during periods with little wind or sun. This electricity could come from French nuclear power plants, and therefore the total nuclear output is a mirage.

Competition in the domestic market is expected to decrease the price of gas and electricity.

Or, domestic also has the mission to improve security of supply and strengthen independence from third countries. This is why the EU spends part of its public funds construction of interconnections, eg the Baltic countries, which are dependent on Russia. In this regard, the need for better coordination at European level is also explained in terms of security.

Member States that fail to do today bloc against countries like Russia on gas supply should take care not to compromise the stability of their supply by poor coordination of their energy transitions .