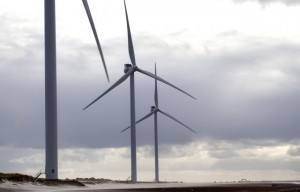 Although expensive, from a certain point of view, wind power is very cheap, from another point of view. Specifically, when the wind blows, the spot market price falls (DAM – DAM) and when the turbines are stoped, the price is skyrocketing for DAM.

For example, according Transelectrica yesterday 20.08.2013 at 10.48, there was exactly one megawatt of wind. All day was a lack of wind, the highest yield recorded was at 17.48 – 410 MWh. Much better were the photovoltaics, which have produced nearly 150 MWh.

Now in Romania are installed about 2,200 MW wind farms and 380 MW photovoltaic.

On August 20, the wind knocked louder at 17.50 about 8.5% of production being achieved in wind power plants. Which, obviously, was seen in the price: DAM largest tranzacţonare price was 268.60 lei / MWh.

Note, for example, in April, prices have been lower because it knocked the wind and louder, and production reached to 1,700 MWh. The average price DAM greatly decreased (for example the average price on April 21 was 79.30 EUR / MWh).

Wind energy and solar energy are basically the cheapest: once the investment, other things are not paid, and that because wind and sun costs nothing! On the other hand, the raw material costs of other producers (coal, gas, oil, water) are sufficiently large, and sometimes representing 70% of the costs (as is the production of electricity from lignite or coal).

Not either Hidroelectrica stands too good in this chapter: water costs about 100 million EUR annually. However, renewable energy has other baskets: green certificates, which are traded at prices between 27 and 55 euros. Thus, in addition to the price of electricity, green certificates payable.

However, it seems that when the wind blows, the biggest loss has HIDROELECTRICA! If on August 19 produced about 28% of the country’s electricity on August 20 reached 20%!