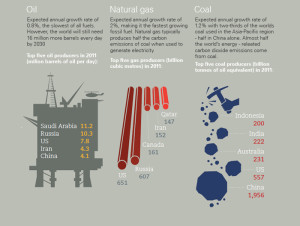 “Much of the growth will come from unconventional oil such as tight oil found in shale rock formations and heavy oil found in Canada and South America. Oil production from deepwater reservoirs is also expected to increase, while enhanced oil recovery techniques will continue to maximise production at mature fields.

As the US shale boom continues and OPEC members rein in production, it is likely that US total liquids production will surpass that of Saudi Arabia and Russia very soon. Natural gas supply is growing rapidly as it is increasingly used for generating power as well as in homes and industrial plants. Traditionally, gas consumption was limited to areas pipelines could reach, but it has become technically feasible and increasingly worthwhile to transport LNG over long distances from suppliers to consumers by ship. This connects hitherto segmented markets, but there is still no global market or global price for gas. Coal consumption increased by only 7% over the 1990s, but then leapt by almost 50% in the 2000-2010 decade. BP expects it to grow a further 25% in the current decade and then growth should slow, with a rise of around 5% in the decade to 2030 as China completes its transition to being a modern industrial economy and the service sector catches up with industry.” 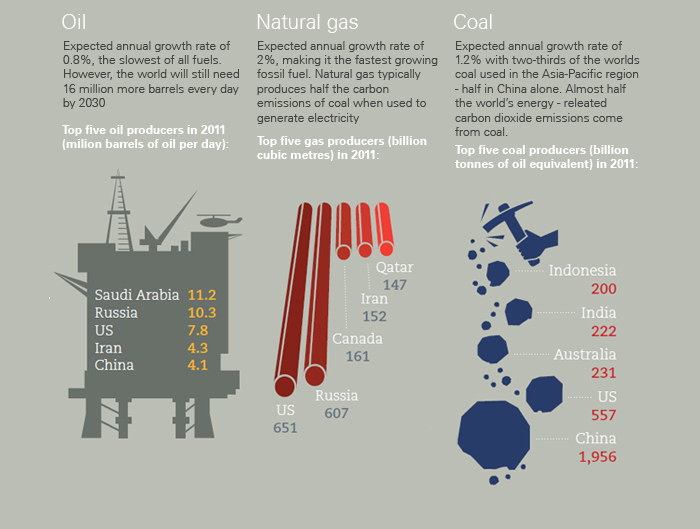 The volume of energy produced by non-fossil fuels such as nuclear, hydroelectricity, biofuels, wind – is expected to almost double by 2030. However, they start from a low base – around 13% of all energy – and will still account for less than 20% of the total by 2030, unless much stronger than expected policy support is put in place or disruptive technologies are developed.

Shale oil – and ‘tight’ oil – and gas are found in shale rock formations and new drilling techniques such as hydraulic fracturing and horizontal drilling have revolutionised production. BP’s chief executive Bob Dudley has described the growth in production as the biggest development in the industry in the past two decades.

Energy intensity and carbon – wealth, energy and the environment 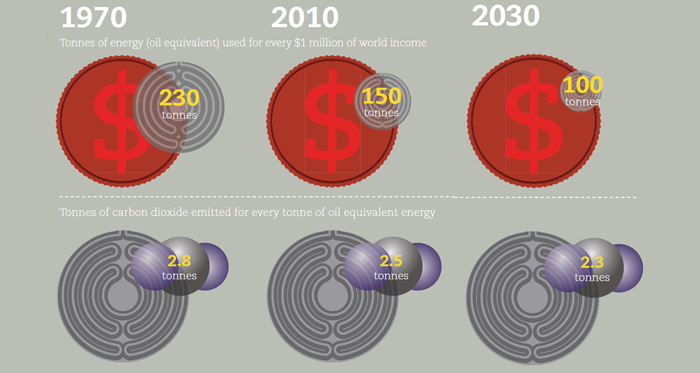