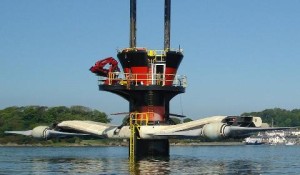 The All Energy conference and exhibition in Aberdeen, Scotland saw growing evidence of the wave and tidal sector's push toward commercialisation. Over 210 of the 580 exhibitors were involved in marine energy, the organizers said, and 15 hours of the conference were devoted to the sector. And, for the first time at this long-running show, an innovation technology showcase featured wave and tidal device developers from the UK, Norway, Australia, Canada and Russia.

Scotland’s energy minister, Fergus Ewing, announced that the nation’s £18 million (US$27 million) Marine Renewables Commercialisation Fund (MRCF), established last year, will be used going forward to provide support for the wave energy sector. Project applications will be accepted from June, and the first funds are expected to be distributed later in the summer.

And in a related announcement, the world’s largest commercial wave farm to date — 40 MW off Scotland’s northwest coast — has been approved by the Scottish government. Developer Lewis Wave Power Ltd, a subsidiary of Aquamarine Power, says the project will use 40-50 of Aquamarine's Oyster devices, which capture energy from near-shore waves. But plans may have to be scaled back, as grid owner SSE said last week that it won’t be able to start building the necessary grid connector before 2017.

Aquamarine’s wave farm and MCT’s planned 10-MW tidal stream array in Wales represent wave and tidal power’s initial steps toward commercialisation and make this an exciting time for the sector, which is "now tackling barriers to deployment", said David Blunt, Gamesa’s director of public policy for UK and EU institutions, in a conference presentation. All Energy’s wave and tidal conference sessions were focused on steps to market and calls for Europe’s large number of research programmes to develop a common agenda to better support emerging technologies. And as the European Marine Energy Centre (EMEC) celebrated its 10th year of testing wave and tidal devices, Norstec, a new trade organisation for the European North Sea offshore sector, was announced.

All Energy also featured an announcement from The Crown Estate, which plans to expand its leasing programme for wave and tidal sites in order to encourage and accelerate technology development. The new sites will include demonstration zones and opportunities for third-party management. And UK energy secretary Ed Davey was on hand to announce that, in the last three years, more than £29 billion ($44 billion) has been invested in renewable energy in the UK, £13.1 billion ($20 billion) of which went to Scottish projects.  However, Davey warned, if a planned September referendum on Scottish independence takes Scotland out of the UK, the nation's renewable energy momentum will suffer.

Like its market, wave and tidal technology is still developing and there were a number of different devices and approaches featured at All Energy. Notable companies in attendance were Pelamis Wave Power, which announced that its P2 wave energy converter had completed one year of accelerated real-sea testing; Andritz Hydro Hammerfest, which has had an early and significant presence in Scotland’s tidal sector; Germany’s Schottel, introducing its 50-kW horizontal free-flow tidal turbine, and Irish company OpenHydro, which has developed an open-centre turbine that sits on the seabed.

On the last afternoon of All Energy, as the rain lashed the exhibition tents and a chill, decidedly non-springlike wind blew through the hall, the event organizers decided "for the comfort and safety of all" to close the marquees several hours early. Not the best weather, perhaps, for a holiday, but perfect for making wave energy from the nearby coastal waters.