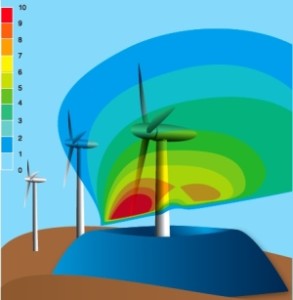 Efficiency is an important consideration in energy technology. Energy always comes from some raw source — chemical reactions, sunlight, kinetic energy, nuclear reactions — and is usually converted into some other form of energy before being used.

In the process of conversion, energy is lost. How much energy is lost is an inverse measure of energy efficiency. That is to say, the more efficient the technology is, the less energy will be lost.

Wind energy from a wind turbine converts the kinetic energy of wind into a different kind of motion to drive a generator, and then into electric current. Energy is lost at both transitions. The efficiency of a wind generator determines how much electricity will be produced from a given amount of wind by a given generator.

The equation to use for wind turbine efficiency is;

There are two main factors in wind turbine efficiency inherent in the equipment itself (other factors are found in the wind, which allows greater efficiency in generation at some speeds than others). These two factors are the efficiency of the drive train or gear box that converts the wind's kinetic energy into the turbine's movement (mostly a function of friction), and the generator efficiency, which determines how much of that transferred kinetic energy is converted into electricity versus lost as waste heat.

The theoretical limit of efficiency for a wind turbine is found by Betz' Law, which was published in 1919 by Albert Betz, a physicist. It's based on the concepts of conservation of mass and air stream momentum and holds that no wind turbine can capture more than 59.3 percent of the kinetic energy in wind. In practice, the most efficient commercial-grade wind turbines available today achieve no better than 80 percent of this theoretical limit, or 47.44 percent.

Comparison To Other Forms Of Energy

It's difficult to make meaningful comparisons in terms of energy efficiency between wind power and fossil fuel energy because the original sources of energy are so different. Wind power is limited only in terms of flow, while fossil fuels are limited in terms of both flow and stock. That is to say, both types of energy can be used only at certain rates, but fossil fuels also have limited stockpiles in the planet and the supply of them can be exhausted, while that cannot happen with wind power. A more meaningful comparison than overall efficiency is the energy produced for consumption by each method minus the energy consumed to produce it, or net energy gain.

What this means is that in the long run, the efficiency and reliability of renewable energy will increasingly be better than that of fossil fuels as time goes by.