Earth's geoid shape is considered a given that Earth's surface is the average level of seas and oceans in quiet state extended beneath continents.

Because a sphere flattened at the poles and bulging at the equator, the Earth is an ellipsoid of rotation. Between geoid and ellipsoid there is a difference of plus or minus 100 m, its volume being identical.

On the other hand, the shape of the geoid is similar to a pear, with the southern hemisphere than the northern curved and the Austra circumpolar boreal flatter than that. In this case, the Earth is called terroid or telluroid.

Follow 360 ˚ animation that gives the real picture of the shape of the Earth, though on the surface it would deprive seas and oceans! 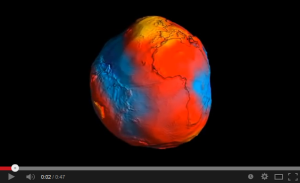