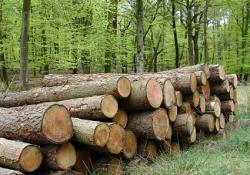 Penalties imposed under criminal law and confiscation of trucks if drivers are caught carrying wood at night, these things should expect those who illegally cut down the forests and harm million, if the new code forest will be approved in the Government meeting on Wednesday.

In the first eight months of 2013 thieves have damaged wood worth 147.6 million, according to data obtained by the thought of the Ministry of Waters, Forests and Fisheries. The total fines of 2,430 data Inspectorates for Forestry and Hunting was, in the same period, 8.1 million lei.

" By defining and framing the crime of acts of cutting, breaking, destruction, damage, removal of roots, without right or theft of trees, regardless of the damage and the sanction such acts under the criminal law tightens penalties, in to deter aggression on the national forest, " explained it to us .

What changes with new Forest Code

If the new Forest Code is approved, it will enter into force after publication in the Official Gazette and supports both forest owners and companies that operate in the wood industry.

Here you will find, the main changes that will bring new Forest Code current legislative framework, law 46/2008, as explained representatives of the Ministry of Waters, Forests and Fisheries.

1.It will change the way the wood mass will be sold

The Wood no longer sells estimated directly from the forest ( sale on foot ) but will sell measured, sorted and shaped ramps in storage, thus increasing and value.

2.Punishment for stealing wood will be rough

Penal Code will be applied to any wood theft and people working in the forestry sector will be held accountable by re-authorization of practice. In case of serious deviations from the forest regime, a permit may by suspended or withdraw .

Shipments of wood at night will also be banned and where it will be broken as the means of transport used in the theft of firewood will be confiscated.

3.It will respect the property rights

All owners who can not harvest the timber by restrictions will receive financial compensation.

4.Agencies operating in the field of mining and primary wood processing will be supported

New Forest Code will focus on better utilization of wood industry in Romania and will discourage the export of logs.

By preparing the legal framework encouraging primary wood processing in deposits and companies that produce furniture and other wooden products with high added value will have priority in purchasing of timber.