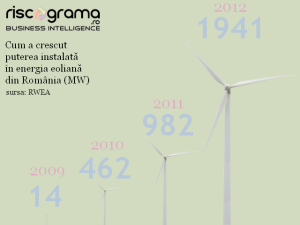 One of the profitable businesses of the coming decades will be small scale electricity production, due to steady growth in consumption and price, as soon as the access of small producers will open completely.

Things now seem imminent – anyone can enter on the market already and can get even grant through green certificates. The major obstacle is that you need to find buyers and you must purchase spare capacity, which actually makes only large producers to have market access.

But late last year, ANRE announced that it will make a new support scheme for small renewable energy producers (less than 1 MW installed capacity for micro-hydro, solar, wind or under 2 MW for biomass).

Thus, the local dealer would be required to take all the quantity produced by them, at a fixed price. The price would be 10-15% lower than the one resulting from the separate sale of the electricity and green certificates; in return, the manufacturer is relieved by the stress of searching for customers. Basically, it is the application of the "feed-in-tariff" principle, which Romania avoided until now in favor of scheme certificates. And last month, ANRE announced that for the same small manufacturers is no need for notifications and authorizations.

After these things will happen, practically all that “uncle John” needs to do is to call Electrica to install the smart meter, then to plug in and wait that cash flows. Even for the tiny systems of a few kW, the income may be substantial.

Is even a great opportunity for the whole Romania to solve, at the same time,  the energy dependence and a part of the rural problem, using the very large number of households in the country. If, for example, one million households would install generators with an average capacity of 10 kW, the national installed capacity would increase by 10 GW, more than 50% of everything that we have now. And those households would each have incomes of hundreds or even thousands euros per month. It may seem science fiction, but in many places in Europe this business exists for years. The difference in favor of Romania is that here are a third of the EU's rural households and financial claims are much lower.

Of course, in such an extreme situation would arise costs and complications on whose solution can’t anyone bet, yet less than any other option. But in any case, the scenario shows just how much space is on the market for those who would grab this deal as soon as possible. Especially that the bulk of the subsidies will come first, and then decrease, so that early entrants have the chance to recover their investment before most even begin to think about it. Compared to large investors, who have high fixed costs and are subsidy dependent, small producers can survive on the market even with only the nominal price, the difference being the amortization period.

Above all, we must consider our own consumption. For someone who makes his own electricity, the temptation of waste can occur, but that would be a huge mistake. Because, if the saving will be bonused directly or indirectly, every kWh saved is two to five times more expensive.

So, home consumption would deserve to be reduced to a minimum. Thermal insulation, heat pumps and underfloor heating, ventilation with heat recovery – all these technologies are no longer amortized over decades, but within a few years. And with biogas, it can only be used waste heat (with the disadvantage that biogas can have possibly raw material costs). So all the electricity consumed must be purchased from the dealer because the sale price will be higher.

Theoretically, “arbitrage” is possible, which in this case is fraud – the same electricity to be sold back or be produced with diesel generators. In Spain it was a surprise when it was discovered that they were "produced" and sold 4,500 MWh of solar installations at night. There are also methods of control.

The investor must make better calculations – to see what could install more efficient, then ponder with the subsidy, which in general is even higher as the production method is more expensive. Network entry prices have not yet been announced, so that the following calculations are based on the current number of green certificates issued for each production method weighted with their trading price (variable, fixed on scholarship and allowed to move between 27 and 55 euros) and with the 15% reduction announced. The grant comes over the current base price, which is 50 euros per MWh and is likely to remain at least at this level.

Each technology has its cost reported to the installed power and a capacity factor (maximum number of hours which must be percentage reported to the total), which shows gross return (not including insurance, taxes and value of the work). The figures are approximate, rounded and should be used only to compare methods between them – for an investment decision there are required specific calculations. Here are the figures: