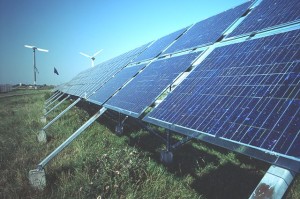 Solar power is already a promising renewable energy, and technological advances continue to lessen our dependence on fossil fuels.

Could the energy of the sun one day power the planet? That's the promise of solar panels, which capture sunlight and transform it into electricity.

What role does the sun play in generating solar energy ?

Sunlight is composed of infinitesimal particles called photons. When these photons come in contact with something, whether the atmosphere or a solid object, they excite the molecules around them. In most cases, this excitement produces heat.

How do solar panels work?

Solar panels are built to take advantage of these photons in a different way. Solar panels are composed of a number of smaller units called photovoltaic cells ("photo" means "light"; "voltaic" means "electricity"). Each cell is made up of two specially treated forms of silicon, which is a nonmetallic element with semiconducting properties.

The solar cell itself is composed of two layers of silicon. Each layer of silicon is treated with other substances to give it either a negative or a positive electrical charge. One layer of silicon has been given a few extra electrons. The second layer has too few electrons.

As the electrons break free, they all flow toward the area with too few electrons. But because silicon is only a semiconductor and lacks the full conducting capacity of metals, the free electrons can't fill the holes in the second layer.

The silicon layers, however, have been sandwiched between metal conductive plates that can take up the electrons. These plates collect the moving electrons, creating an electrical current that can then leave the photovoltaic cell through wires. This electrical current can be put directly to use or stored in a battery. 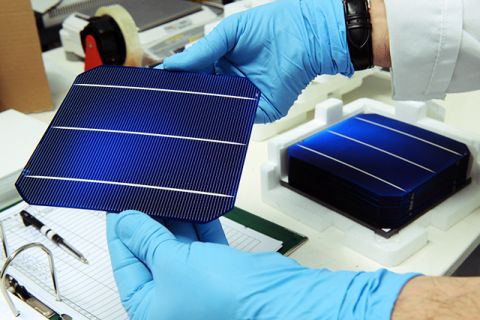 How efficient are solar panels?

The earliest solar panels only captured a small percentage of the sun’s energy potential.

Today's cells, however, have become good enough that an April 2014 report from the research firm McKinsey & Company called solar energy "disruptive" to other energy industries.

Not only do the solar panels of today produce more energy, but their production costs have fallen. McKinsey estimates that the cost of solar power will fall to $1.60 a watt by 2020, making new solar power construction competitive with natural gas, nuclear energy, and coal-fired electricity.