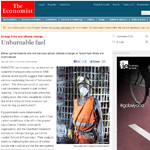 Companies are betting that government climate policies will fail” – The Economist

The reason fossil fuel firms are not trying to reduce their carbon emissions could be due to uncertainty on climate and energy policy, suggests the Economist in a recent editorial.

The paper cites cuts in renewable energy support schemes as one of the elements influencing investors. “Companies are betting that government climate policies will fail.”

This is exactly what EWEA has been warning for many months:

“The financial and economic crisis has provoked a wave of uncertainty across the European Union since 2010, with national governments making damaging retroactive changes to policies and regulations for wind energy.”

The Economist added that in mid-April the European Parliament voted against attempts to shore up Europe’s emissions trading system, the world’s largest carbon market, against collapse.

“Putting it at risk suggests that Europeans have lost their will to endure short-term pain for long-term environmental gain,” The Economist said. “Nor is this the only such sign. Several cash-strapped EU countries are cutting subsidies for renewable energy. And governments around the world have failed to make progress towards a new global climate-change treaty. Betting against tough climate policies seems almost prudent.”

The Economist also said that fossil fuel firms should explain how their activities are compatible with government emissions targets. “But so long as governments are ambivalent about those targets, it seems fruitless to demand more of companies and markets. At the moment neither public policies nor markets reflect the risks of a warmer world.”

News of, and reaction to, the report – Unburnable Carbon 2013: Wasted Capital and Stranded Assets — has also appeared in The New York  Times, the Guardian, Sydney Morning Herald, Bloomberg News, BBC and Financial Times.

Quoting from the report, which was written by Carbon Tracker and the Grantham Research Institute on Climate Change, The Economist editorial noted that the report said a lot of fossil fuel reserves would have to remain in the ground if global temperatures are not to rise more than 2°C, the limit most scientists suggest as safe for humankind.