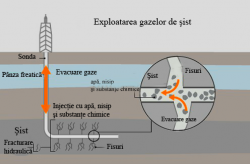 After two years of analysis, the European Commission is now working on a unified strategy on shale gas, announced European commissioner for the environment.

Three out of four Europeans are, however, concerned about the possible exploitation of the resources, according to a Eurobarometer survey quoted Monday by Commissioner at a specialized seminar held in London, the "Financial Times" .

This conclusion does not change, but the need for a special approach in the field, especially as economic recovery is hampered by the increasing cost of conventional energy.

The lack of uniform legislation on shale gas, and poor risk assessment that possible exploitation of this resource would have are among the causes that cause concern among Europeans.

Shale gas " can become a success or a failure"

He admits that the technology used for shale gas could have a negative impact on the quality of water, air or the seismic activity.

Conclusions , but totally unconfirmed studies are counter to the economic needs of the Union, whose recovery depends largely on the price of energy.

The model tends to be taken by Poland and the UK, said Janez Potočnik.

"The citizens of these countries are, however, more skeptical, and Brussels increasingly concerned about how the public responds. In context, after two years of theoretical analysis, the European Commission is now trying to change their approach. It wants a clear strategy , direct and especially unitary. If each member state manages the situation by its rules, then it will create confusion, "attracted attention in London , Janez Potočnik.

" Shale gas may become a success or a failure. Union has, however, needs to diversify resources to reduce costs and dependence, all part of the Europe 2020 Strategy "- concluded Janez Potočnik.