A sample of the product a 100% algae derived biodiesel fuel, as Solazyme, Inc. and Propel Fuels, through a joint effort began selling biodiesel fuels on Tuesday Nov. 13, 2012 at a Valero station in Redwood City, Calif., one of the four locations in the Bay Area. Bay Area drivers will become the first consumers worldwide to fill their gas tanks with American-made green biodiesel fuels. Photo: Michael Macor, The Chronicle. 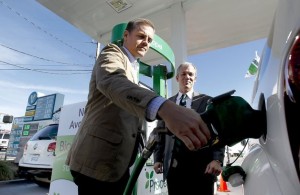 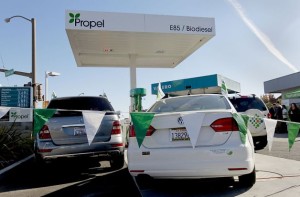 Big oil took a small but significant hit Tuesday when Bay Area motorists began filling up their gas tanks with algae, becoming the first private citizens in the world to use a domestically grown product that could revolutionize the fuel industry.

The first alternative fuel made from algae went on sale at four Bay Area gas stations in what advocates insist is the first wave in a tide of clean fuel that will hit the marketplace.

"Today, at this station, we are putting a stake in the ground," said Matt Horton, chief executive officer of Propel Fuels, as he prepared to fill the first tank with the algae-based product at the Valero station on Whipple Avenue in Redwood City. "We hope to build hundreds of stations like this in California."

The fuel, which is actually 20 percent algae and 80 percent petroleum, is available to any vehicle that runs on diesel, and it spews much less smog and ozone-depleting greenhouse gases, Horton said.

There are now more than a million Californians driving alternative-fuel-ready vehicles, but there is not enough clean fuel, and the supply line is virtually nonexistent, Horton said.

The product, made from algae grown by the South San Francisco company Solazyme, has been used in trials by the military and industrial companies. The pilot program will make it available on the retail market for a month at Propel's clean fuel fill-up tanks at stations in Redwood City, San Jose, Berkeley and Oakland. After a month, a decision will be made on whether to continue offering the product.

The algae fuel, called Biodiesel B20, was being sold for a little less than $4.25 a gallon in Redwood City. That's the same as the average price for diesel fuel in California.

"We're talking about fuels that are offered at standard diesel pricing," said Bob Ames, vice president in charge of fuels and commercialization for Solazyme.

Ames said the algae oil is made in stainless steel vessels at Solazyme's plant in Peoria, Ill., using a fermentation process in which a specific organism, the name of which he would not reveal, is combined with sugar. He said the company tested many strains of algae over the years to determine which one they could reproduce quickly and repeatedly.

The resulting oil is processed into different kinds of fuel, including jet and marine-grade fuels, at a biodiesel plant in California. The end product produces 30 percent fewer particulates, 20 percent less carbon monoxide and 10 percent fewer hydrocarbons than other diesel and biodiesel fuels.

The new gas falls in line with California's "low-carbon fuel standard," which forces fuel producers to lower the amount of greenhouse gas emissions in their products 10 percent by 2020. In January, the California Air Resources Board approved strict rules designed to cut in half current vehicle emissions by 2025. It means automakers will have to cut exhaust by two-thirds and begin mass-producing cars that do not run on gasoline.

The idea behind the requirements, which will get increasingly strict as the years go by, is to promote innovation in batteries, hydrogen fuel cells and plug-in hybrid technology and cut the state's dependence on oil. The goal is to have at least 80 percent of the state's fleet of new vehicles running on clean fuel technology by 2050.

Low-carbon biofuels will undoubtedly be part of the solution, according to experts.

Corn, cooking grease and other products have been tried. Currently, oil companies are experimenting with biofuel blends, including cellulosic ethanol, made from grass, crop stubble or woody plants, but there are serious questions about whether the supply can meet demand. As things are, motorists primarily use diesel because that is what is available.

There are indications that things are beginning to turn around. Emeryville's Amyris Inc. formed a joint venture late last year with French oil giant Total to bring renewable diesel and jet fuel to the global market.

Propel is trying to provide infrastructure. The company now has a network of 29 gas stations, including seven in the Bay Area, where it leases space and offers different types of biodiesel.

Horton said most diesel vehicles could run on 100 percent algae fuel, but doing that would result in higher costs to the consumer. Also, he said, many automakers oppose allowing a mix higher than 20 percent. The goal, Horton said, is to increase the blend as the supply and demand increase over time.

"It really is an access question that we're working to remedy," he said. "None of these fuels are a silver bullet that is going to fix the problem and get us off oil. It's going to be a variety of fuels. Our task is to drive awareness. When consumers know it is available, that it is priced right and it reduces carbon emissions, they will use it."