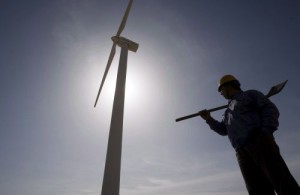 The financial burden sagging on the shoulders of industrial consumers (Alro Slatina and ArcelorMittal Galati) and on those of the population was the main reason invoked by representatives of the Ministry of Economy when they proposed delaying the granting of a number of certificates for a period of three years and a half , starting July 1, 2014.

Without doubt, the most affected sector will be wind power that had the most investments and has reached 2200 MW of installed power.
In fact, after analysis, we find that wind power generated and generates electricity price decreases and this is openly acknowledged by all those that buy now cheaper energy, due to the diversification of production capacities correlated, it is true, and lower consumption”, said for Green Report Raluca Rusu, Investor Relations Manager Monsson Group, the largest developer of wind farms in Romania.
According to Raluca Rusu, the fact that electricity can be purchased at a price lower than last year demonstrates that renewable energy does not increase bills, but, on the contrary, these subsidies are offset by a lower total price, price obtained through diversification of energy sources and with a larger amount on the market.

Investments that were made in Romania are in the early years of the loan payment, thus delaying a certificate represents, in fact, his uncollectability at the time when the rate must be paid to the bank. This context leads to inability to pay its payment obligations and this is scheduled to happen for 4 years and a half, as presented today by the draft ordinance”, said the Monsson Group Representative.

Investments of over 3 billion €, 4400 employees
According to Raluca Rusu, investment in building wind power plants in Romania amounted to 3.4 billion €.
Of this, a sum of over 1 billion € lies in the Romanian economy, through companies providing electrical equipment, building materials, transportation, installation, construction and the ones providing service.

The over 2,200 MW installed brought to the state budget over 300 million € in taxes paid only during construction, without adding taxes paid during the design and approval of such plants. Freezing and canceling projects will affect those who have benefited in this period of crisis from investments made in renewable energy. We can start from cement manufacturers, that have their employees involved, to those who built roads and transformer stations”, said Rusu.
Also, Monsson estimated that the state budget will lose over 180 million €, which could have been collected from annual taxes, money that was to be paid, by the owners of wind power plants, as well as operating companies and maintenance, all recorded in Romania, providing services.

Currently, in total, in the wind sector, there are over 4,400 people employed directly and indirectly, according to estimates of Monsson representative, more than 10,000 if count raw material suppliers, which also had the “bubble oxygen “in the crisis.
Energy Minister, Constantin Nita, announced in early April, that the government will issue an ordinance that would delay the granting of a number of green certificates for a period of three years and a half since July 1, 2013.
According to the draft ordinance “is temporarily postponed the granting of a number of green certificates from those provided in par. (2) for each 1 MWh produced and delivered by the producers of electricity from renewable sources, as follows: a) a green certificate for new hydroelectrics, with installed power of 10 MW at most; b) a green certificate for wind power plants; c) two green certificates for solar power plants. “