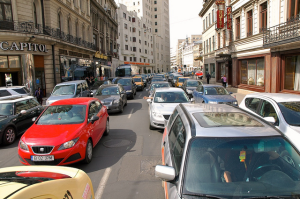 I have often said that Bucharest is a very polluted city, but what does that mean, exactly ?

Well, there are all sorts of methods and measurements that can express the level of pollution in precise values and there are numerous studies on the health risks associated with living in a polluted city.

Pollution means, in fact, particles found in air, consisting of various substances that are harmful for the body once inhaled while breathing. The particles are small enough to reach the inside of the body.

More specifically, we talk about three types of particles:

At such sizes (PM10 are ten times smaller than the diameter of a human hair), these particles get into the lungs and others are small enough to be transferred into the blood and carried through the body, including deposited in tissues and organs. There they cause nasty effects: particles such as those above are classified as Group 1 carcinogens, the worst form.

In addition to this particles we have other toxic substances included in the "pollution". Nitrogen dioxide (NO2) is one of them. Most maps are calculating pollution levels of PM10 and NO2.

HOW ARE THESE PARTICLE PRODUCT

PM2.5: the above, except that are formed by atoms of other materials or smaller, but also smog, cigarette smoke, dust remains suspended in the air, smoke from burning fuels.

PM0.1: are produced by diesel engines, cigarettes, smog, dust in the air.

The above ones are extremely vague, right ? You already know the smoke hurt, but the important thing to remember is that the "smoke" is a general term that describes a mass of particles small enough to get into your blood, enough light that they are carried through the air for days, weeks before it filed by gravity (rain helps), and consists of highly toxic compounds which act on the body becomes significant when they are exposed to days, months, even years. Live your whole life in the city, with such particles PM10 and smaller.

The smoke produced by combustion in diesel engines containing compounds of antimony, beryllium, chromium, cobalt, manganese, cadmium, mercury, lead, nitrogen, selenium, and sulfur plus cyanide and dioxins. The exact list of substances found in the smoke generated by burning diesel has 32 positions and includes names "big" as arsenic, benzene, cadmium and formaldehyde, all Group 1 carcinogens.

Cigarette smoke contains hydrogen cyanide, formaldehyde, benzene, arsenic, nickel, chromium, cadmium, lead, even polonium, which it sometimes occurs naturally in such reactions and is highly toxic. List of substances has 41 positions and only 4 are not sufficient evidence that would be carcinogenic.

These are just examples at hand. Many things around us produce smaller particles or PM10: sites that generate dust, engines, factories, printers, cars and subway brakes, tires aircraft when making contact with the track, a good barbecue by burning wood and coal and so on. There must be "smoke" should not be visible or have a strong smell of anything but talk of various particles that float through the air and seeps into your lungs.

HOW IS MEASURED POLLUTION

25 micrograms / mc is the limit emissions imposed by the European Union for PM2.5. For particles PM10 limit is 40 ug / cm. That's why I said that pollution is not visible, is not a "smoke" that has a specific color. Smoke is a highly concentrated air particles in the nanoscale, but even with 0.00000204% air is harmful particles.

Nitrogen dioxide is a product of combustion air into the combustion engines, is toxic to humans and living in an environment with 40-100 ug / m risking respiratory diseases.

WHAT ARE THE EFFECTS OF POLLUTION

Die quickly. Cancer, heart disease, lung and so on. I guess you already expected this response.

Diseases are practically endless. Asthma, cardiovascular disease, lung disease, premature birth, birth defects and so on. Particle deposition in the arteries can lead to various diseases, ranging up to attack. The number of cancers that can be produced is quite high, the most easy to guess, such as the lungs, to cancer in various organs after you were exposed to these particles for 10, 20 or 40 years.

Not die at age 25, that's clear. But maybe you do infarction at 55, while if you have lived in the same style, but in a less polluted air, you can be done in 60 years. Live overlooking an avenue widely circulated or a power plant ?

Maybe you'll live up to 82 years, but if you lived in any village in the mountains (or even on the other side of the block, where not get as much exhaust gas) would have started all 82, but without cough chronic heart problems from the age of 62.

Who knows ? People react so differently to toxins even stronger evidence that some people have died shortly after they received radiation doses in Hiroshima or Chernobyl, and others beside them reached 90 years. The human body is weird sometimes.

In Europe, a 2005 study found that 370,000 people die each year before they have "time" just because they stay in polluted environment. Globally, the figure is several million per year.

Even worse is that there is no harmless amount of pollution. There is a threshold below which to be safe; any level above zero pollution steadily degrade your health.

The largest study was done in Europe, called ESCAPE and pursued 312 944 people from 9 countries and 17 types of environments, over a period of several years, observing their evolution. The conclusions were:

In conclusion, pollution is demeaning. Slowly but surely destroying your body and health. Worse, invisible pollution is caused by many factors and should be well under control, that those particles are small enough to fit everywhere.

HOW POLLUTED IS BUCHAREST

Very polluted compared to other cities. Perhaps you know that already. Is the Town of much delayed sites and is generating cement dust, the cars parked on the lawn around the blocks, which thus destroy it, and the earth devoid of greenery generates more dust. The city of used cars brought from abroad and registered in Bulgaria.

The city with very little green space per capita. Town of dead trees and abandoned buildings, the city where are built blocks in the parks.

Pollution is measured in micrograms per cubic meter. EU recommends a limit of 40 ug / m as an annual average, and the World Health Organization recommends a limit of 20 ug / m, imposing a limited number of exceedances of critical values during the year. In Bucharest, in 2005, pollution was above 65 ug / cm. 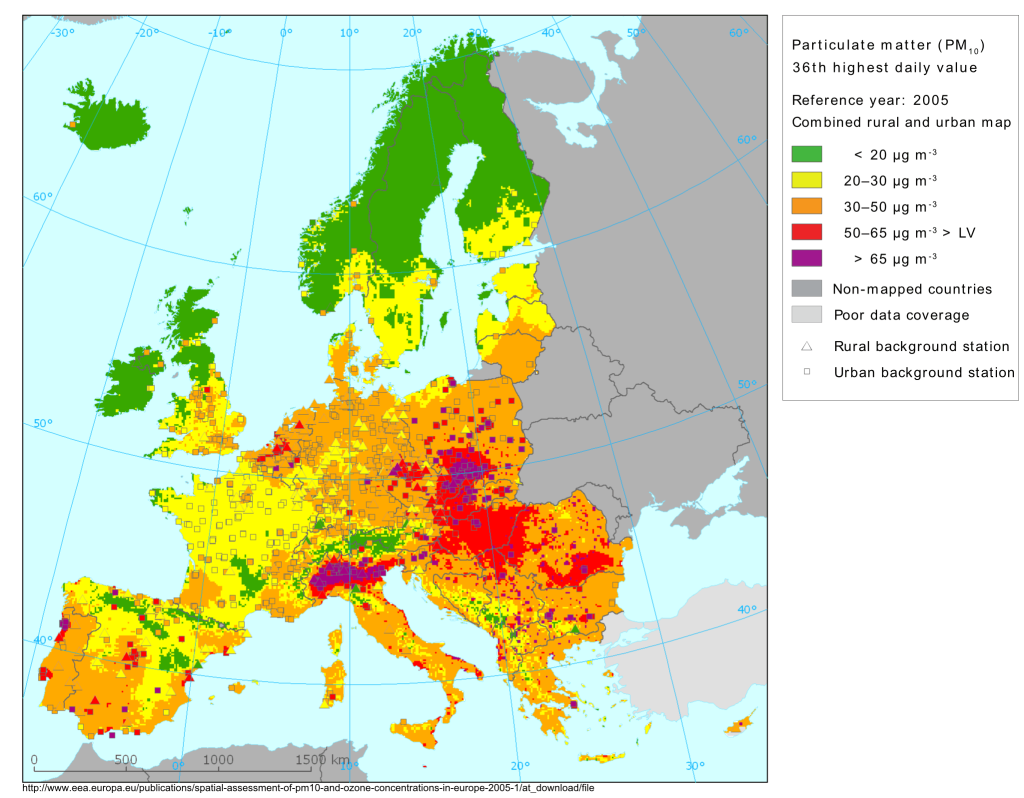 Check out the map, only Hungary, Poland and Slovakia are on the same level "purple" with their capitals and northern Italy seems to have trouble.

2011: another measurement in 25 cities of 12 EU countries finds Bucharest 38.2 ug / cm, followed by 33.7 Budapest and Barcelona with 27. We are one of the 25 most polluted city in which measurements were made . 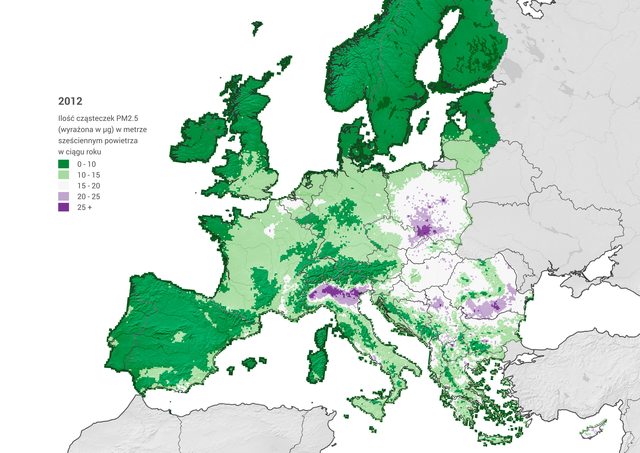 A Europe-wide study for PM10 pollution found in 2012 that Bucharest is the second most polluted European capital, after Sofia, and recorded 92 days above normal admitted, while exceeding the maximum allowed is 35.

2013: Bucharest has 34 ug / m, but the Environmental Protection Agency study is challenged because measuring stations functioned only partially. For example the Military Circle (now I understand why that container across the Military, block Romarta) worked 55% of the 365 days to measure PM10 and nitrogen dioxide measurement was not made. 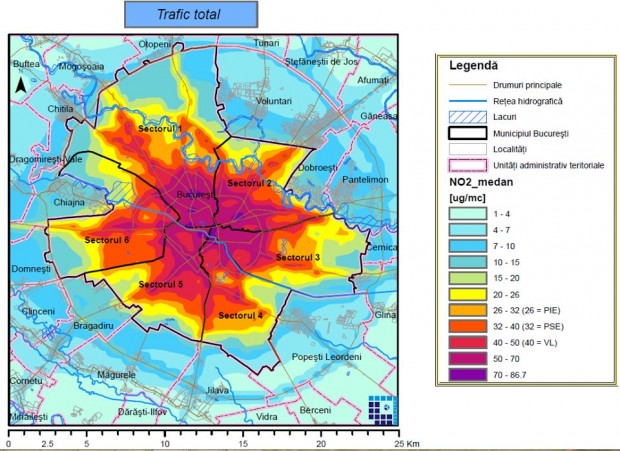 The situation is serious enough that the European Union in September 25, 2014 opened an infringement procedure against Romania for excessive pollution in Bucharest, Iasi and Brasov. After several warnings, Romania has not managed to reduce their pollution to below the limits set for annual mean and maximum number of instances, so that the EU is waiting.

Romania fails to protect its citizens from pollution with fine particles (PM10). These fine particles come from emissions from industry, traffic and domestic heating and can cause asthma, cardiovascular problems, lung cancer and premature death. According to EU legislation, Member States are required to limit citizens' exposure to particles of this type. Citizens of certain areas in Bucharest, Brasov and Iasi were exposed to unhealthy levels almost continuously for PM10 since 2007, according to latest reports from 2012. The Commission considers that Romania has taken appropriate steps since 2007 to protect the health of citizens and calls Romania to take measures perspective rapid and effective for the period of non-compliance should be as short as possible. Today's action, which is technically a supplementary reasoned opinion, following a letter of formal notice sent in February 2013. Additional If Romania does not act, the Commission may refer the case to the EU Court of Justice.

It's just another thing that the authorities have not done, Oprescu was a little busy taking bribes, Ministry of Environment a bit busy to drink coffee.

That's the pollution. Not an abstract term, but is based on measurement, definitions and limits, and the measurements say that Bucharest is a city polluted not like the rest of Europe.

Do you remember when in Bucharest were installed some electronic billboards that said pollution levels, but then they have not worked ? Now we'd know how to read them.

The situation is a bit worse: most harmful airborne particles PM0.1 are the most fine and can reach the bone, so to speak. Exactly for this things there are not boundaries and laws, all focusing on PM2.5 and PM10 so far. The PM0.1 it seems not to bentioned somewhere.

One could always take quick steps:

Simple stuff, not to say to mount  expensive filters at factories or change the polluting buses, we can not afford that.

Here's a supermarket in Vienna, located somewhere between the blocks. It was a simple design like "hall" as Mega Image and made a few city blocks, only that it had stopped Viennese then with soil and planted grass on it, so you can stay there including lounging on the roof of the supermarket. Cool idea, right ? 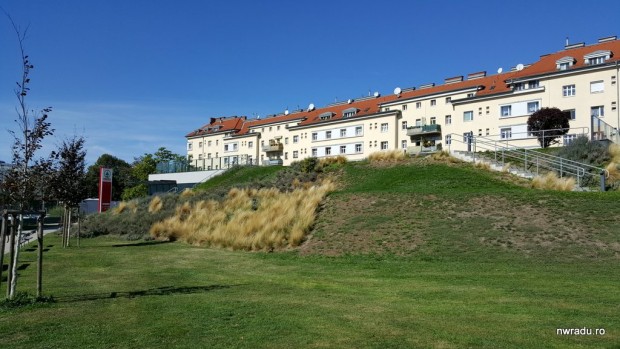 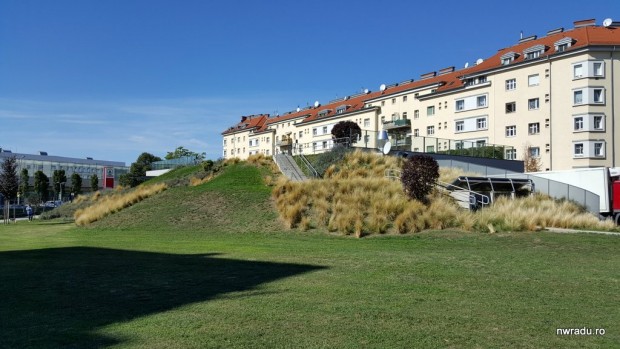 They have no windows to the supermarket, but anyway they were covered by shelves or promotional posters, so there's no loss. They have, in turn, green space. Here, however, the green on the largest boulevard looks like in our city: 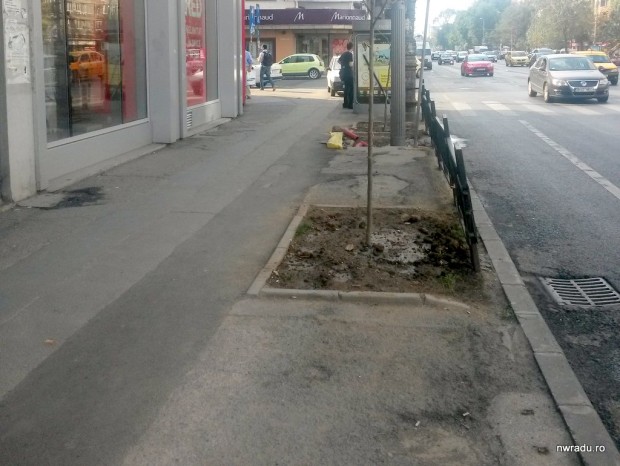 It could be worse. Do you remember the reports in recent weeks about the excessive pollution in Shanghai and Beijing, with code red smog and schools closed in order not to expose children to the outdoors? In those days, pollution in cities reached to 300 ug / cm.

Code Red was canceled when the value fell to 200 ug / cm, although a reasonable limit would be 40 ug / m, as in Europe.