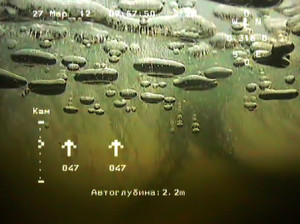 Methane bubbles rising from the bottom of the Arctic Ocean, filmed by a remotely operated vehicle

New measurements performed in the Arctic show that the level of methane released into the atmosphere is double what it previously estimated, in 2010, informs livescience.com .

We believe that the release of methane in the Arctic, particularly in Eastern Siberia could affect the entire world, not just the Arctic "warns Natalia Shakov, lead author of the study and biochemist at the University of Alaska in Fairbanks.

Arctic permafrost is a heavily researched area because of its climate threat. Soil or frozen methane has huge stocks because these deposits growing from inside the Earth, and the gases made ​​by microbes that live there.

Scientists fear that the Arctic warming could lead to rapid melting of permafrost, releasing methane stored all.

In the study conducted Shakov and colleagues conducted measurements at thousands of bubbles of methane, between 2003 and 2012. They attribute warming permafrost a long-lasting changes initiated when sea levels rose at the end of the last Ice Age.

Other scientists believe that warming of permafrost has begun recently.

This is the first time in 12,000 years when the Arctic warmed by 7 degrees Celsius in the summer and this is something entirely new. If you have a methane explosion will be a catastrophe, "said Peter Wadhams, of Cambridge University in the UK.